You are here: Home / ARTICLES, STORIES & POEMS, PERSONAL STORIES & COMMENTARY / Together Forever, In Life And Death (2007)

Carl Robare called me. For almost 10 years, we’ve been meeting for coffee early in the morning about once a week in North Adams, Massachusetts. He was born in the city, but lives just over the line in Stamford, Vermont. Carl says, “I was at the Houghton Cemetery in Stamford this morning, and I saw these two headstones – husband and wife who died before the Civil War – and they’re leaning against each other. It’s really strange. You’ve got to come up and see it.”

I’ve known Carl long enough to understand that if he says it’s worth looking at, it is. So after coffee a few days later, I followed him up there, and we walked into the cemetery. “There they are,” he said. “Those stones could have leaned in any direction, but somehow, they wound up touching each other. What are the chances?”

We stared at the inscriptions and wondered about the couple, Titus and Marilly Bassett. He died in 1841, at age 39, she in 1852, at age 45. What did they die from? Did they have any children? Does anyone ever visit their graves?

Then Carl noticed something else – in the lower right corner of Titus’s stone – someone’s name, probably the person who carved the stone. It was hard to read – “A. B. Gone,” maybe? Carl said he’d try to figure it out.

When I got home, I went right to the computer. I logged on to Ancestry.com. It’s the best one for genealogy, and I have a subscription. Right away, I found Titus in the 1840 census, living in Clarksburg, the Massachusetts town right between Stamford and North Adams. In this census, other family members are not named, but it listed two females in the home, one between 30 and 40 years old (probably Marilly) and one under five years old (probably a daughter).

In the 1850 census, in Adams, I found 43-year-old widow Marilly (spelled Marilla), born in Vermont, and two daughters, 10-year-old Viola and 9-year-old Rozella, both born in Vermont. Two years later, Marilly will die, and the children will have lost both parents. Where did they go? What happened to them? This kind of stuff just haunts me.

In the 1860 census, a Viola H. Bassett, born in Vermont about 1840, is listed as living in Charlestown, Massachusetts, in the home of Mr. and Mrs. Alfred Green. Her occupation is not given. In the 1870 census, Viola is still living in Charlestown, but this time, her last name is Smith, and she is apparently living with her in-laws, though there is no evidence which of the Smith sons she is married to. Her occupation is not given. The family lives next door to the Greens, the family Viola lived with in 1860.

In 1880, she is living with her husband, James L. Smith, and one daughter, Josphene (Josephine?), born in 1874. From that point, I could find no further records for Viola, James or Josphene. Marilly and Titus’s other daughter, Rozella, proved to be an even bigger challenge. The only possible Rozella I could find was Rozella Lockyer, born in Vermont about 1841, and living in Hartland (Niagara County), New York in 1860, with her husband Lewis and their 8-year-old son Richard. I could find nothing else about them. From that point, they seemed to disappear into thin air.

One thing always seems to lead to another. Carl calls again. He used aluminum foil pressed against Titus’s headstone to determine the name of the person who carved it. It was A. B. Cone, and Carl had already located an Alanson B. Cone in the 1840 census in Adams. But that’s as far as he could go, since he doesn’t have a subscription to Ancestry.com. Back to the computer. In less than an hour, this is what I found.

Mr. Cone was descended from John Graves, who was born in England in 1605, and settled in Concord, Massachusetts, in 1635. Alanson’s parents were Urial Cone and Beulah Chapin, who married in 1805, in Wilbraham, Massachusetts. Alanson was born in Middlefield, Massachusetts, on February 4, 1810, and married Anna McCauley, born June 1803, in Cambridge, New York. They had two children, Marcia and Henry.

I drove up there to see it. It was in poor condition, and “A. B. Cone” was the only information on it – no dates, nothing else. I wonder if Alanson carved his own stone.

His son Henry died in 1870 at the age of 33, and is also buried at Woodlands. His daughter Marcia married and moved to Hartford, Connecticut, and died there at the age of 28, leaving husband Henry Williams and two children, Carrie and John. I was unable to find any further records of the family.

One thing I do know. After more than 150 years, Titus and Marilly are still leaning on each other. 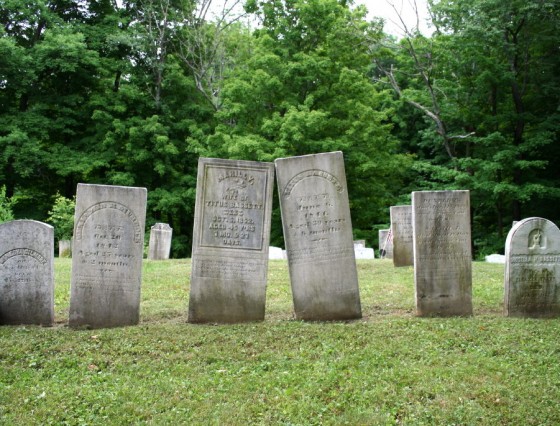