You are here: Home / ARTICLES, STORIES & POEMS, NORTH ADAMS ARTICLES / Bang On A Can: A New North Adams Tradition (June 2012)

It’s almost nine-thirty. It has been storming on and off all evening, rip-roaring blasts of thunder shaking the thick walls of Mass MoCA’s Hunter Center, while torrents of rain pelt the roof. A grainy black and white film is on the screen, showing disturbing views of apocalyptic floods in the 1920s, not unlike the 1927 Hoosic River flood that devastated North Adams. A 30-piece orchestra is on stage, playing the most intense and astonishing music I have ever heard, exciting as it is terrifying. The last of seven movements, called “What We Build,” is pounding away, the angry storm playing along like a giant kettle drum from hell. I hold on tight and ride it out. The multi-media performance, oddly titled “Shelter,” crash-lands, and everyone takes a deep breath.

And then the storm outside mysteriously ends.

Note: The composition called “Shelter,” was composed by Michael Gordon, Julia Wolfe and David Lang, and the black and white film called “What We Build” was made by Bill Morrison.

Ten minutes later, world-renowned composer Terry Riley and four other musicians quietly walk out on stage. Riley sits down at the piano, introduces his musical partners, and then announces simply, “I’m Terry Riley.” At that very moment, an enormous clap of thunder explodes overhead. Riley points calmly toward the ceiling and says, “And that’s God.”

Ho hum, just another Bang on a Can Marathon.

Since it debuted at the Massachusetts Museum of Contemporary Art in 2002, the Bang on a Can Summer Music Festival has become a North Adams tradition for me, an annual event I build my summer schedule around. So what is Bang on a Can, and why is it such a big deal?

According to the Bang on a Can website: “The Bang on a Can Summer Music Festival at Mass MoCA is dedicated entirely to adventurous contemporary music. We will write it. We will perform it. We will think about it and we will talk about it. We will spend three weeks immersed in recent music that has changed the world. Available studies include Balinese music workshops, improvisation, as well as performance coaching, master classes, music business seminars and more. Composers will have their works performed. Players will perform publicly in ensembles sitting alongside their teachers. There are daily performances in the museum galleries. And the residency concludes with a six-hour blow-out Marathon Concert featuring performances by the student/faculty ensembles.”

My first exposure to Bang on a Can had left me cold. When the musicians hauled their instruments into North Adams 10 years ago, I checked out a couple of the recitals in the galleries, but I just couldn’t connect. For this dedicated fan of jazz, classical, folk, rock, and traditional popular music (Sinatra, Fitzgerald, Billie Holiday), it sounded sort of like Jackson Pollock’s paintings set to music. But then I saw this press release.

“In conjunction with the City of North Adams, artist Eric Rudd is holding his fourth annual Eagle Street Beach on Thursday, July 18, from 4 to 7 p.m. Bang on a Can All-Stars will perform Terry Riley’s ‘In C’ from 6 to 7 p.m., sponsored by Mass MoCA.”

So I went to the beach and watched hundreds of kids make sand sculptures in the shadows of funky 19th-century buildings, and then waited for the musicians to set up their equipment at the south end of the street. Finally they launched “In C,” with the keyboardist plunking out a rhythmic, insistent C, while the rest of the band played mostly variations of this idea, and added some inventive counterpoint, not unlike an Indian raga. It was instantly hypnotic, and slowly attracted a curious crowd.

Soon my eyes became fixed on an older man who was watching. I recognized him as the guy who plays accordion in a band that performs “old-timey” songs for seniors. At first, he looked bewildered, but soon he was nodding his head up and down in rhythm. He was really into it. Most of the crowd stuck it out, all 45 minutes of it. Then I walked over and talked to Evan Ziporyn, the clarinet player, and told him about the reaction of the accordion player. “Wow, that’s great,” he said. “Thanks for telling me. It makes me feel good.” I called MoCA the next day and got two tickets to the Marathon, convincing my wife to come along for the ride.

The Bang on a Can Marathon began on Saturday afternoon at four o’clock and lasted until well past ten. Various student and faculty ensembles played musical pieces that were loud, soft, ethereal, rhythmically pulsating, strangely beautiful, baffling, or well…kind of annoying. You could go out and get a cup of coffee or something to eat anytime, an opportunity my wife couldn’t resist, since she could barely tolerate most of the music. But I found it so fascinating that I didn’t want to miss anything, so I sat through even the most difficult pieces.

I was especially impressed with “Big, Beautiful, Dark, and Scary,” by Julia Wolfe, one of the founding members of the Can. It was just what the title suggested. Even my wife enjoyed it, and she also liked “In C,” which was the finale. During one of the intermissions, I ran into Ms. Wolfe and blurted out, “This is fantastic. I even like the stuff I don’t like.” I had become a Can Fan. And it’s been that way ever since.

Every July it’s the same routine. I take in a few of the student gallery recitals. These students surely must be among the greatest young musicians in the world. I love watching them play, as they share the stage with the oddly appropriate art installations, which seem to take on new meaning with a contemporary soundtrack. And I also enjoy the events they have for children.

Next on the bill is a special Saturday night concert featuring the work of a major composer, usually with the composer in attendance. Steve Reich, Meredith Monk and Don Byron, not household names among traditionalists, are just a few of the internationally-known artists who have come to our little city in the Berkshires. Lucky us.

And then it’s the Marathon. This is when you can come for the food and stay for the show. The museum’s Lickety Split Café serves up an outdoor barbeque next to the upside down trees. Visitors can break away from the concerts for dinner and still hear the music, which pours out of speakers and into the courtyard. When the musicians are not engaged on stage, they join in the fun and chow down on chicken and corn on the cob with everyone else. I like to call it Shebang on a Can. 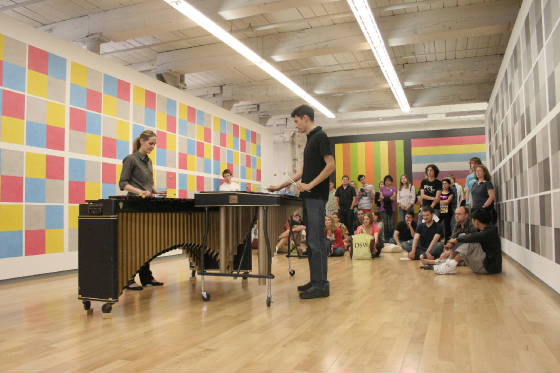 The following are some of my favorite Bang on a Can memories over the years.

-Having coffee at Brewhaha in the morning and watching the young musicians carrying their instrument cases up Marshall Street on their way to another long day of playing and learning.

-Walking into the Mass MoCA courtyard and being greeted with strange music coming out of the windows.

-The four-o’clock opening of one of the Marathons, when Mark Stewart, the amazing and wacky instrumentalist, along with dozens of other musicians, marched past the upside down trees and into the theater while playing long rubber hoses, sounding like a herd of crazed elephants. The audience was invited to march along behind, and when we got there, the musicians gathered on stage and continued bellowing on the hoses for at least five minutes. It was hysterical.

-The annual performances by musicians from Uzbekistan, who enchant the audience with their virtuosity on traditional instruments, and smile with delight at having the opportunity to share their culture with an enthusiastic crowd.

-Sitting on the wall by the upside down trees, eating ice cream and chatting with some folks, and composers Steve Reich and Julia Wolfe walk by and say hello to us.

-The outdoor concerts at Windsor Lake and Natural Bridge.

-Watching and listening to Todd Reynolds play the violin with childlike joy. By the way, he lives in North Adams.

-Finally, any instance when musician and composer Evan Ziporyn introduces and explains a piece. He has the ability to make anything understandable and interesting. He does it with self-effacing humor, and yet you know he’s passionate about what he is doing. He is such a talent. The same goes for Julia Wolfe, David Lang and Michael Gordon. All are great musical ambassadors.

A few years ago at the Marathon, I was watching and listening as six music students played “Horses of Instruction,” a composition by Steve Martland. This incredibly challenging piece was 10 minutes of intense and ever-changing rhythms that left me exhausted, which I presume was the composer’s intent, unless he was just looking to torture the musicians.

I imagined a “Rate-A-Record” segment on Dick Clark’s American Bandstand back in the fifties. The wonders of time travel cause an edited, three-minute recording of this piece to be sandwiched between new singles by Chuck Berry and Connie Francis. Tony and Gina, regular teens on the show, listen, and then Clark sticks the microphone in their faces. “So what do you think kids?”

“Gotta good beat, but you can’t dance to it,” says Tony, obviously confused. “But I’ll give it an 89, just ‘cause it’s weird.” Gina looks stunned. “Gosh, I don’t know; whatever Tony says.”

The 2012 edition of the festival will kick off on July 9, and run three weeks, ending with the Marathon on Saturday, July 28. No one should miss it, even if you can’t dance to it.

Photos taken at the Bang on a Can Summer Music Festival at the Massachusetts Museum of Contemporary Art (Mass MoCA), in North Adams, Massachusetts. Photos courtesy of Mass MoCA. The 2012 festival runs from July 9 to July 28.