Miss Hattie Squires, a most beautiful and modest maiden of sixteen summers, living three miles east of Tifton, was married to Mr. Cecil E. Bower, a worthy young business man of our city, last Sunday afternoon at the Methodist Parsonage, Rev. E.M. Whiting officiating, and the strength of the matrimonial tie has been tested by the court of ordinary, restoring to the father his beautiful daughter, who as a bride, was in company with the groom but an hour or so.

Arriving in the city, Mr. J.R. Squires, father of the bride, immediately swore out “kidnapping” papers for Mr. Bower. Placing them, in the hands of an officer, the two men appeared at the home of Mr. A.P. Jones, who immediately went on the bond of the groom. Seeing that Mr. Squires was enraged beyond reason, Mr. Jones asked him to have no disturbance at his house, to which Mr. Squires replied, ” I shall not, but my daughter returns home with me this night, or she or I die.” Believing it best for him to take her, became reconciled by morning, Mrs. Bower, though over her protest, and strongly so, was persuaded to go.

Thinking that all would be well, Monday morning, Rev. Miller, Col. Fulwood and a representative of the Gazette accompanied Mr. Bower to the Squires home (leaving the groom in the background), hopeful of bringing about a reconciliation and returning with the bride. In answer to a question put to her there, Mrs. Bower replied, “Yes, if Father and Mother will only give their consent, I will gladly join Mr. Bower, for I love him.”

Returning to the city, habeas corpus papers were sworn out requiring Mr. Squires to produce his daughter in court, Tuesday. The case was entered into and forcibly argued, and at the close of the argument, Judge Walker said, “You may draw an order restoring the daughter to the father, in accordance with her desires as spoken to me privately.” Before affixiing his signature, however, the matter was left to Mrs. Bower to make her decision.

Here was the test of her very soul as the young heart’s blood rushed through her weeping, nerve strained form. What must she do? Between whom of the two pleading men then before her must she go, the father from her conception or the husband to whom she had but a few hours ago entered into a life contract? Sad indeed was her picture. For fully ten minutes she weighed it all, when slowly and seemingly reluctant, she removed the ring from her finger and placed it into the husband’s hand, then left to re-enter her father’s home.

Being a young man in every way worthy of Miss Squires, her father in court said that he had no objections to Mr. Bower personally, only the way in which he got her. Thursday, Mr. Squires called on Mr. Bower, shook hands with him, told him he had no objection to him personally, and that if he wanted to call on or write his daughter he was free to do so, with her consent, and if she wanted to see him he would send for him, or if she wanted to come to see him, he would bring her. A reconciliation appears to be only a matter of a few hours.

The young lady, who has acted in the latter part of the affair with rare good judgement, is said to have expressed herself at being anxious to join the man of her choice when a little time brings sober reflections, and this in turn brings about a condition of affairs that will be just to both her parents and to him.

I posted the article above in 2008. At that time, I tried to track down living descendants, so I could send the article to them in case they were interested, and to find out how the life of this couple turned out. But I couldn’t find anything. Ten years later, in September of 2018, I received the following email:

“While doing some computer ancestry searching, I came across your article on the 1907 marriage of my grandparents. Hattie Lindora Squires (1891-1956) and Cecil Emory Bower (1880-1948), my father’s parents, were married in a colorful way. After my dad finished at the University of Georgia in 1949 (with help from the newly enacted GI Bill), our family moved to the Bower farm in Bacon County, Georgia, to live with my grandmother Hattie. My grandfather Cecil had bought the farm in 1942, with a loan from my great-grandfather James Robert Squires.”

“Wow! Thanks for contacting me. That is very interesting. So I assume that Hattie and Cecil “lived happily ever after.”

“I think they did. They lived in a couple of places before settling in Ocilla, Georgia, somewhere in the early 1920s. After Granddaddy lost his store during the Depression, they were caretakers of a farm near Fitzgerald, Georgia. Then in 1942, they bought the farm in Bacon County. My grandparents’ eldest child, Ercell, died as a very young child and is buried at Oak Hill Cemetery, in Quitman, Georgia. My grandparents are buried there as well. They had five other children, each of whom died in their 80s: Myrtice, Marie, James, Allen (my father), and Margaret. According to my grandfather’s WWI draft card he was short, of medium build, and had brown hair and hazel eyes. My grandmother had auburn hair and I believe blue eyes. She was quite a Victorian lady and was very kind to me.”

Mr. Bower sent me several photos of Hattie and Cecil, and an article about their “official” marriage, which appeared in a newspaper in Covington, Georgia. I found a picture of their gravestones on FindAGrave.com. 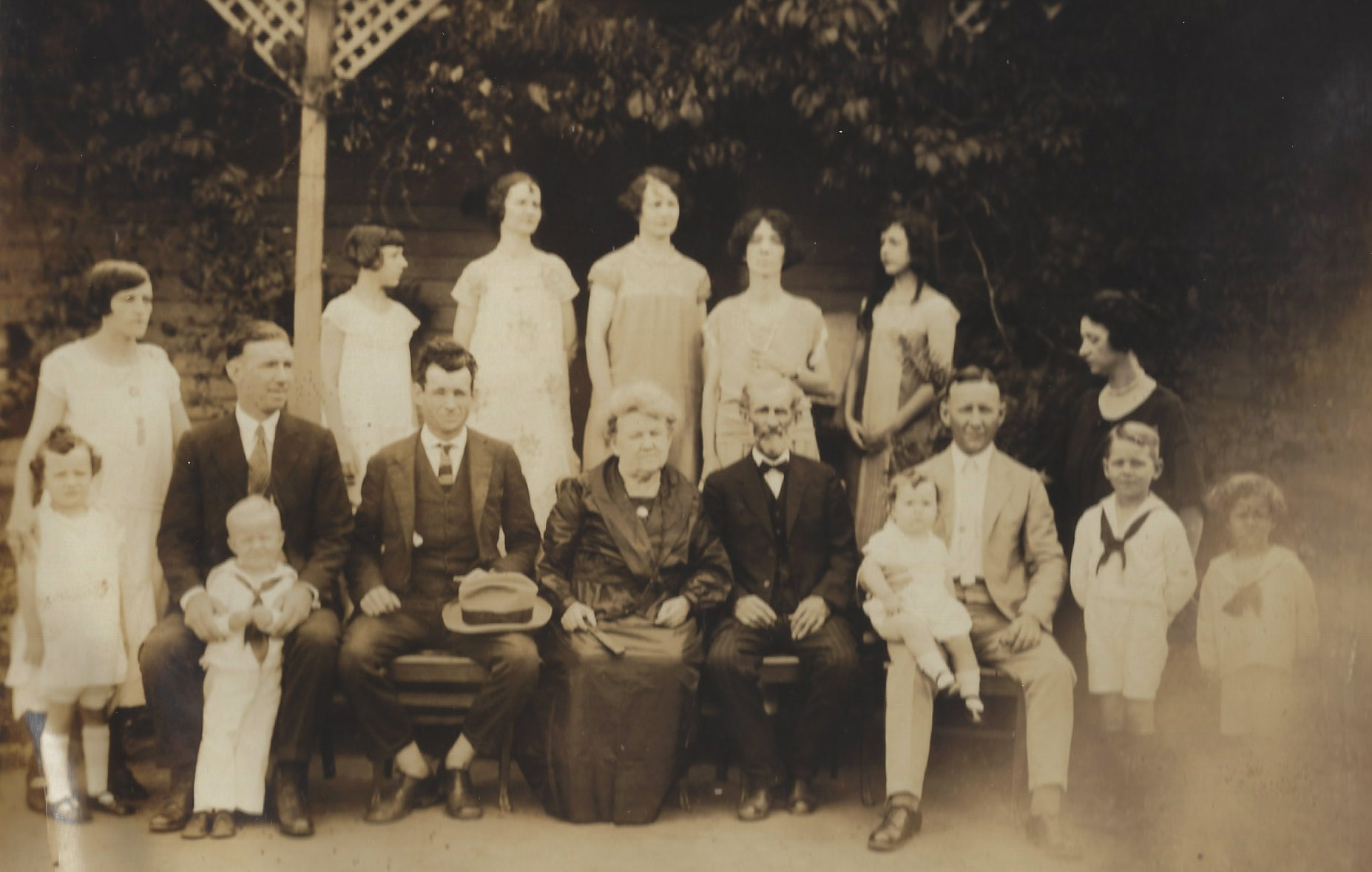 The Bower extended family. Man sitting at right in the front row is Cecil Bower. Seated on his lap is his daughter Margaret. To his immediate left is son James, and next to James is son Allen (father of Allen Bower, Jr, who contacted me about the article). Standing directly behind James is his mother Hattie. Photo circa 1925. 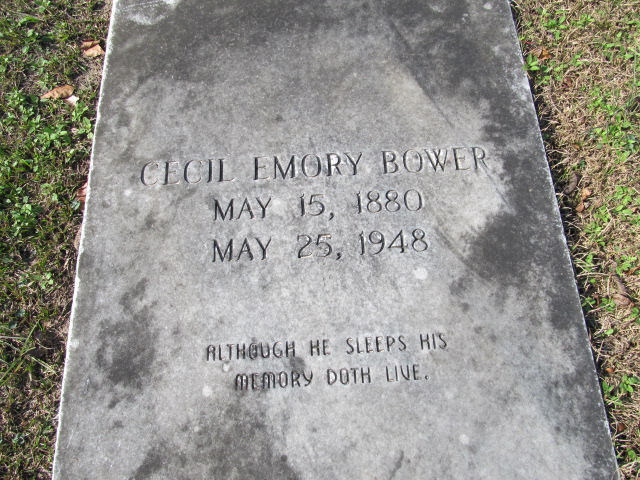 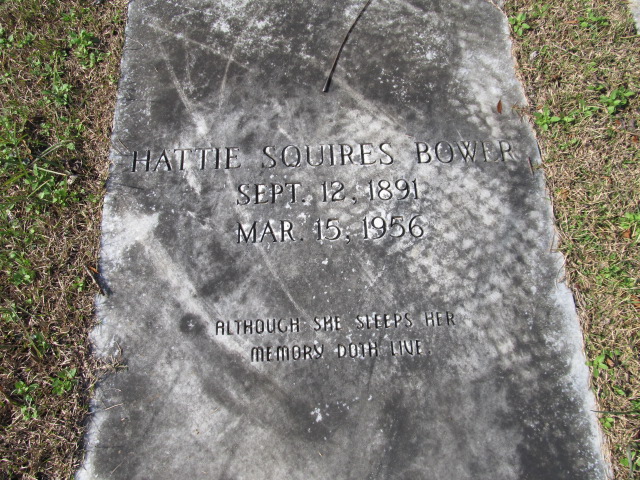