Lewis Hine caption: A typical view of Carmina Caruso, a ten year old Home Worker as she walks around crocheting as she goes. See also other photos of her and Home Work report. Location: Somerville, Massachusetts, August 1912.

“In Italy, I think she got as far as the second grade. She didn’t go to school at all in this country. But she taught herself a lot. She was tremendous in math. She could figure out every little detail, and she was a great household manager.” -Frances Leccese, daughter-in-law of Carmina Caruso

The following is from Child Labor in Home Industries, by Mary Van Kleeck, published in 1915.

“The present employment of children in tenements in New York City gives no ground for optimism regarding New York State’s method of regulating home work. A casual investigator who chooses to walk through the crowded tenement districts will find children at work who would not be permitted to enter a factory. He will see women and children carrying bundles of clothing or boxes of artificial flowers from workshop to home, and if he should follow any of them he would learn something of the system of industry which makes child labor still possible in New York State.”

“Two days ago one of my fellow workers visited a family living on Thompson Street. It was after school hours. She found a mother and four children making artificial flowers. The oldest girl was eleven years old. Her sister was nine, her little brother was seven, and a little sister was five. The three older children had just come home from school, but the youngest child was too young to go, and worked all day separating the petals of artificial flowers. The oldest child of eleven was deformed. She was not larger than a child of five.”

“The mother and four children have set themselves a certain allotment of work to finish each day, and the book in which their earnings are recorded by the employer says that those earnings are sixty cents a day. To earn that sixty cents a day, they must make six dozen wreaths of daisies, three or four pieces to each daisy, and thirty-nine daisies on each wreath. The father is a ragman earning six dollars a week. The brother is out of work. The mother and children work until ten or eleven o’clock at night, and what they do not finish at night they must get up in time to finish in the morning before school begins. The little girl, Angelina, said she did the work the teacher gave her to do at home before school in the morning. ‘This morning, first I did the writing,” she said, “then I did the two times, and then the three times, so I won’t have so much to do tomorrow. I like school better than home. I don’t like home. There’s too many flowers.'”

Carmina Caruso was photographed in Somerville, Massachusetts, not New York City, and she was crocheting, not making flowers; but her situation would have been markedly similar. 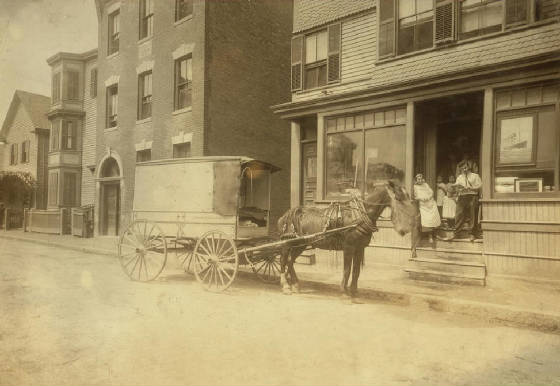 Lewis Hine caption: The wagon that delivers Home Work to Somerville, Mass. the owner of wagon (who is not the driver) is O.H. Brown, 27 Main Street, Reading Mass. These wagons (about 4 in all) are worked on commission, not owned by the factory. Location: Somerville, Massachusetts, August 1912.

Somerville is about four miles from Boston. In 1910, the population was about 75,000. According to family history information and various government documents, Carmina Caruso was born in Gaeta, Italy, on January 17, 1902. She was one of at least nine children born to Salvatore Caruso and Maria Antonia Cavicchio, who married in 1891. Most information indicates that Salvatore came alone to the US about 1909, and the rest of his family arrived in 1910. So when Carmina was photographed in 1912, she had been in the US two years and probably spoke only Italian.

Carmina married Cosmo Leccese in 1918. They had five children, including Raymond, born in 1925. I contacted Raymond, who lives near Boston. He had never seen the Lewis Hine photos of his mother. Although he was not able to participate in a telephone interview, I had an enjoyable conversation with his wife, Frances, who provided considerable information about Carmina.

Lewis Hine caption: Crocheting on underwear at home. Carmina Caruso, 10 years old, a regular worker; sister Mary, 5 years old, learning; mother and neighbor sitting out in unkept [i.e., unkempt?] side yard all day long. Sometimes they walk up and down the street as they work. 18 South Street, Somerville, Mass., August 1912.

JM: Your husband was Carmina’s son. How long did you know her?

FL: I got to know her in 1947, when I started going out with my future husband. She was born in Italy in 1902. I think she came to this country in about 1910, when she was eight years old. She lived in that house in the picture, where they were crocheting. My husband remembers the house. He went into it once. He said it was a two-family converted into a three-family.

When my husband was just one year old, he got pneumonia, and they sent him to live with his grandmother, who had a big farm in Bedford, Massachusetts. The family used to go up there in the summer and help out. His mother would visit him every week and ask him to come home, but he didn’t want to. He broke his wrist when he was 14 years old, and then he moved back home.

JM: Did Carmina work as an adult?

FL: Not when I knew her, but she did work before then in several places. In one of the jobs, she made wallets. I know that many times, she didn’t have the money for the car fare, so she would walk all the way into Boston from Somerville to go to work. They did most of their shopping in the North End (Italian-American section of Boston). She was very frugal. She spent wisely, and she always used to say, ‘Spend a dollar to save a dollar.’

JM: Where did she live when you knew her?

FL: She lived at Caruso Place, which was named after her mother. It was a terrace (row houses) in Somerville with about three houses in it. Then she and her husband bought a three-family house on Mansfield Street, in Somerville.

JM: Could she speak English?

JM: How far did she get in school?

FL: In Italy, I think she got as far as the second grade. She didn’t go to school at all in this country. But she taught herself a lot. She was tremendous in math. She could figure out every little detail, and she was a great household manager. Her husband just went to work and brought in the pay. He worked in a hot dog factory. It was called Squire’s (John P. Squire & Co) at first. And then it was called Swift (Swift & Co). During the war, he did very well, because they made a lot of the food for the Armed Forces.

Her husband was 15 years older than she was. He died at the age of 88, 15 years before she died. After he died, she lived in the house on Mansfield Street for a few years. One of her daughters lived on the second floor and another lived on the third floor. But when they moved to Arlington and bought their own homes, her grandchildren moved in, so she stayed a little longer. But she starting getting sick a lot with pancreatitis. She finally moved in with her daughter in Belmont, and that’s where she died, at the age of 88.

FL: She was a great cook. She took care of a lot of her nieces and nephews while her sisters went to work. Her husband and other members of the family would go hunting. They would shoot pheasants and squirrels, and she would strip them, clean them and cook them. She always had a house full of company. It was like a party every Saturday and Sunday at her house. They all went to her house, because she was the best cook. She also crocheted very well.

She loved to play Bingo and she loved to gamble. We would take her to Foxwoods (casino in Connecticut). We took her to Las Vegas, and she was in her glory. When she was in her eighties, she would say that she was too old and couldn’t do anything anymore. But just say Bingo or gambling, and she was ready to go. We bought her one of those visor caps that the card players use, and she would wear it to Bingo. She was a very easy-going person. She liked people. She was very generous with her money at the end. She lived a comfortable life. I got along with her very well.

JM: Lewis Hine took Carmina’s picture in order to publicize child labor. Did she ever talk about working as a young girl?

FL: No. She never mentioned that at all to us. So the pictures were a surprise. I never thought that what the children had to do then was so bad, compared to what they had to do on farms. When I went to California, I saw some of the Mexicans and Indians that worked on the lettuce farms. Some of them were only 14 or 15 years old. And the houses that they had to live in were awful. Not that Carmina and her family didn’t have hard times. My husband said that when he lived on the farm with his grandmother, sometimes they had nothing to eat but potatoes. She would cook them every which way. But they struggled through it. They were able to buy homes. They lost them all during the Depression, but they rose above it again. 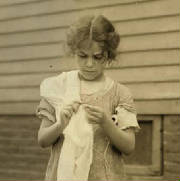