Lewis Hine caption: Harry McShane – 134 B’way [I,e, Broadway] -Cin. O. – 16 yrs. of age on June 29, 1908. Had his left arm pulled off near shoulder, and right leg broken through kneecap, by being caught on belt of a machine in Spring factory in May 1908. Had been working in factory more than 2 yrs. Was on his feet for first time after the accident, the day this photo was taken. No attention was paid by employers to the boy either at hospital or home according to statement of boy’s father. No com- pensation. Location: Cincinnati, Ohio, August 1908.

“No attention was paid by employers to the boy either at hospital or home according to statement of boy’s father. No compensation.” -From Lewis Hine caption

Harry McShane’s father was Peter McShane. He was a self-employed house painter and decorator. I can imagine the mixture of sadness and anger he must have felt about his son’s accident. Of course, it was hardly uncommon in those days for workers to face dangerous conditions, and for employers to just cast off injured employees without a second thought. 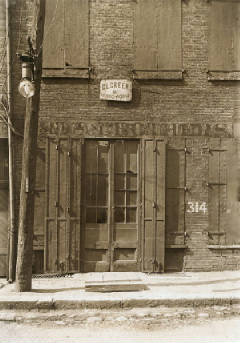 The C.L. Greeno Co. was a successful furniture manufacturer, later establishing a branch in Oakland, California. Owner Charles L. Greeno was born in Pennsylvania about 1839, and died in Florida in 1913.

Here is a newspaper article I found about Mr. Greeno:

“Miss Belle Greeno of this place was very much surprised as well as delighted when she received through the mail Thursday of last week a check for $500 and a letter of explanation stating that the amount had been left here by her uncle, Col. C. L. Greeno, a wealthy furniture manufacturer of Cincinnati, Ohio, who died about a month ago at his winter home in Florida. Col. Greeno was about 70 years of age, and was a veteran of the Union army, being in the same company as the late President McKinley, and was a close personal friend of the latter. He had visited his relatives here on several occasions, his last visit being something over a year ago, when he made a special trip to see to the erection of a monument at the graves of his parents in old Salem churchyard northwest of town.” -February 14, 1913, Higbee News, Howard County, Missouri

Perhaps Mr. Greeno could have left a tiny bit of his fortune to Harry.

Harry did not leave much of a trail, but thanks to a few scraps of information on the Internet, and the generous assistance of Chris Bell-Puckett of the Cincinnati Historical Society, this is what I found.

William Harry McShane was born in Philadelphia, Pennsylvania, on June 25, 1889, according to his death certificate. According to the news article about the accident, he was 15 at the time, making his year of birth 1893. Hine’s caption also gave his age as 15. But his year of birth was given as 1890 on his WWII draft registration. So I am unable to firmly establish his age at the time of the accident.

His parents were Peter and Sarah. In about 1904, Peter remarried, to a woman named Mary Anna, and Harry is living with them in 1910 at 134 Broadway, Cincinnati, according to the census. He had one known sibling, Ella, who was born of the same parents in 1888.

In the Cincinnati city directories, from 1912 to 1917, Harry’s occupation is listed as “switchman” for the railroad. So despite his injuries and disability, he was employed as early as four years after the accident. His father died of “paralysis” (possibly polio) on June 23, 1918, at about the age of 62. In the 1920 census, Harry is living with his stepmother at 212 Broadway, and his occupation is now listed as “flagman,” obviously still for the railroad.

A year later (December 14, 1921), his stepmother Mary Anna died of breast cancer, at age 58. Harry shows up in the 1930 census living in Dayton, Ohio, where he is a boarder, and works as a “watchman” for the railroad.

According to his 1942 draft registration, Harry was living at the YMCA in Hamilton, Ohio, which is about 25 miles north of Cincinnati (or possibly living in Hamilton County, where Cincinnati is located). This is the only record which indicates that his middle name may have been Henry, not Harry. He was listed as a watchman for the Pennsylvania Railroad. In the Cincinnati directories, he was living at the 7th Avenue Hotel in 1964, and at the Fort Washington Hotel in Cincinnati from 1970 to 1975. At that time, both hotels had long passed their days of relative luxury, and served as substandard housing for mostly low-income single people.

He died of unknown causes on May 29, 1975. It appears that his only survivor was his sister Ella, who died two years later. She was divorced and had no apparent survivors.

Harry McShane, a young boy who faced tremendous hardship, and a man who had to make his living despite a missing arm, must have been pretty tough and durable. In his later years, he probably survived on a railroad pension. He is buried at Spring Grove Cemetery in Cincinnati, along with his father, stepmother and sister. 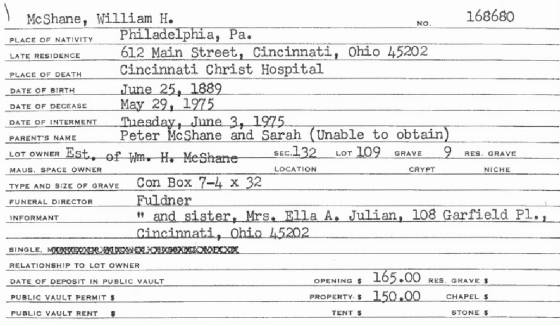