“This photograph of Catherine Young and her children was taken in 1909. Three months later, they were torn apart by tragic circumstances. Today, 105 years later, in this museum, the family is finally together again.” -Joe Manning, speaking at the Georgia Museum of Agriculture and Historic Village, in Tifton, Georgia, on March 15, 2014 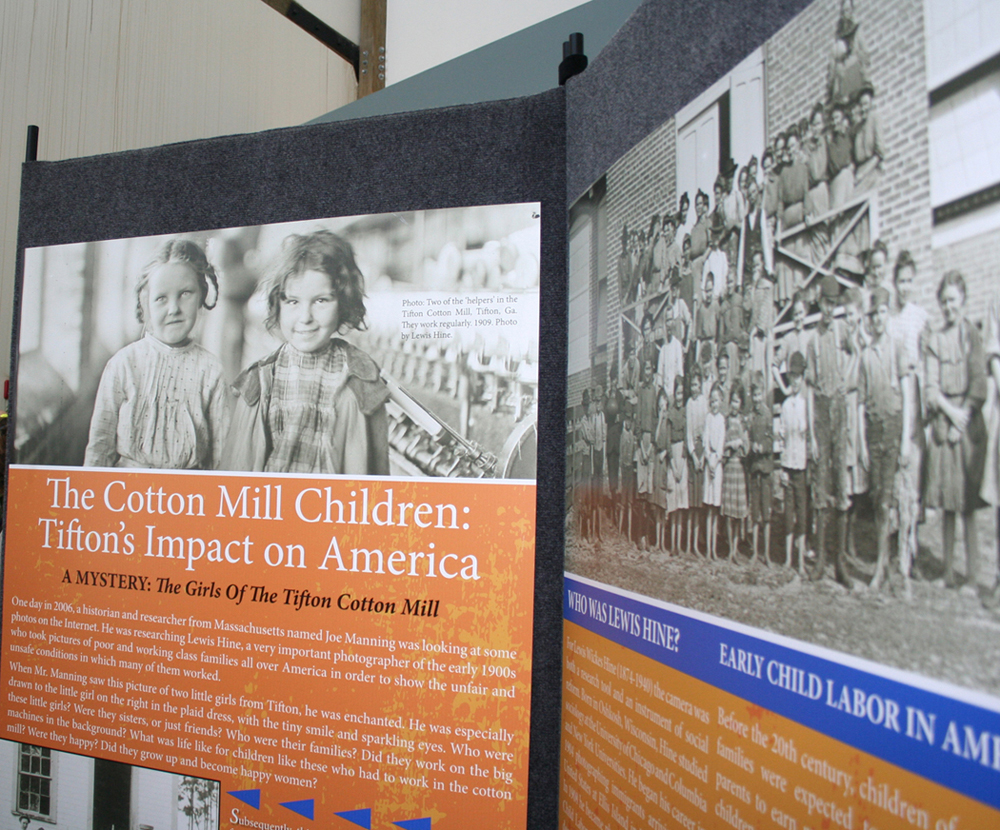 After I completed my story of Catherine Young and her family, in September of 2011, I compiled a mailing list of all the descendants I contacted during my research and, with their permission, shared that list with each of them. As my story indicates, after Mrs. Young gave up her seven youngest children to an orphanage in 1909, most of those children lost track of one another when they were subsequently adopted, or placed with host families. For the next 100 years, those children, and several generations of their descendants, had little or no knowledge of their family history. My story allowed them to not only see the Hine photos of their family for the first time, and to learn what happened to the lives of Catherine and her children, but it also, with the mailing list, gave them the opportunity to contact aunts, uncles and cousins they had never even heard of.

But it occurred to me that many of the descendants might be reluctant to call people who were essentially strangers, even if they were relatives. So I tried to think of a way to give them an opportunity to have a family reunion. I decided that the best way would be to get a museum in Georgia to install an exhibit based on my story, and then invite the descendants to the grand opening. The museum I chose to contact was the Georgia Museum of Agriculture and Historic Village, located on the campus of Abraham Baldwin Agricultural College. Most appropriately, it is in Tifton.

In October of 2011, I emailed Dr. Lisa Lishman, curator of the museum. She replied:

“Thank you for passing on the link to your moving story about Catherine Young and her family. This is such an important piece of our history, one that is little known. I would love our museum to have some part in sharing the story of the Young family, perhaps through a special exhibit based on your research.” 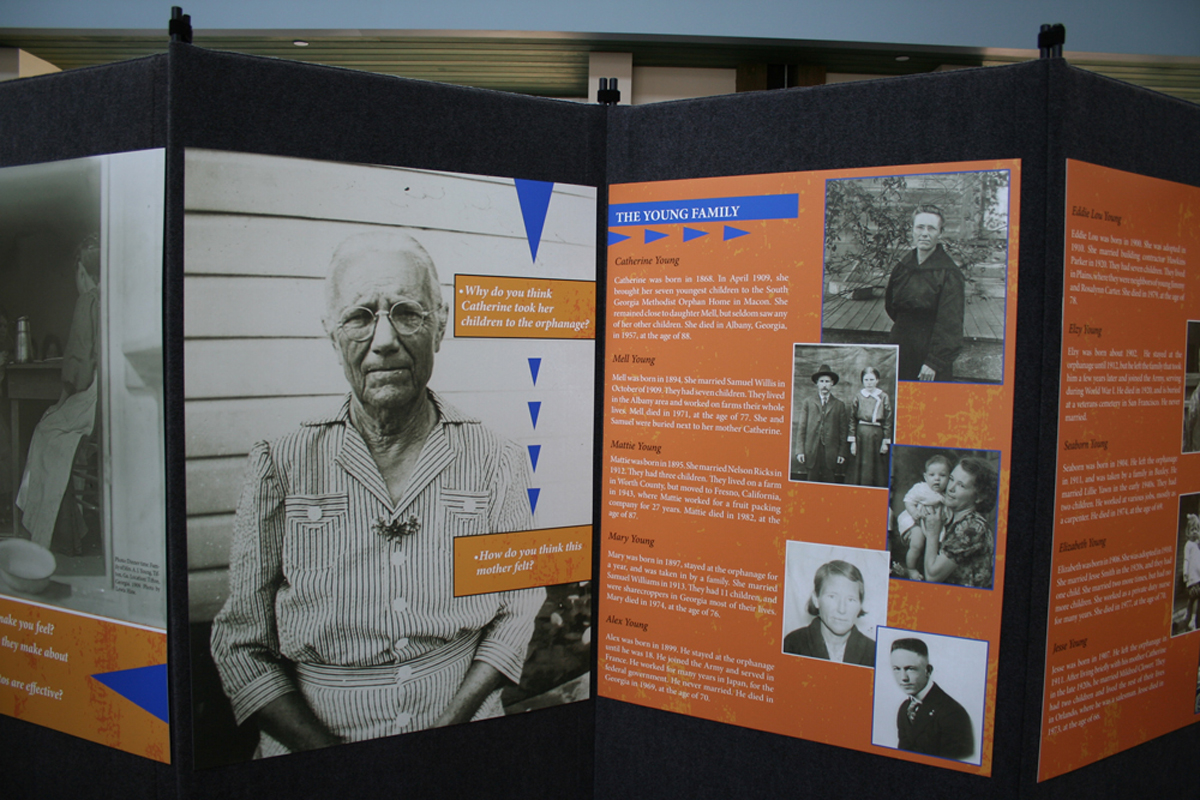 Dr. Lishman spent considerable time looking for grants and other funding sources, and in the spring of 2013, a decision was made to go forward with the exhibit. A few months later, Dr. Lishman and her family relocated to the Midwest, and Polly Huff, the assistant director and new curator, took over the responsibility. On March 15, 2014, the grand opening of the exhibit took place, with nearly 100 of the descendants in attendance. Each of them wore a name tag with their own name, and the name of the child from whom they are directly descended.

My wife and I were invited. I made an hour-long presentation to the descendants, and an additional 100 people from the community. And then I spent a few wonderful hours meeting the Young family.

That’s me, Joe Manning, on the left meeting Earl Parker, son of Eddie Lou Young (married name Parker). Earl attended college and received a PhD in Botany. He taught at Abraham Baldwin Agricultural College for 20 years. Ironically, the museum is on the campus of that college, and Mr. Parker is a longtime resident of Tifton, where his mother and her family were photographed by Lewis Hine.

In the late afternoon of the event, the museum staff managed to gather together about half of the 100 Young family descendants that attended. That’s me, Joe Manning, waving.

One of the descendants I met at the event was Sue Catrett Parker, the widow of Maurice Parker, one of Eddie Lou Young’s sons. An interview with her is included in my story of the family. She surprised me with a remarkable gift. It was a quilt made by Eddie Lou in her later years.

In 2007, I saw a Lewis Hine photo of a beautiful, but unidentified girl standing near a spinning machine in a Tifton cotton mill. Seven years later, I met more than 20 of her direct descendants. And now, on this chilly New England morning, I look forward to sitting on the sofa tonight, warmed by a quilt made by that very same girl, 105 years after her shining image was committed to history.

Congratulations to the Georgia Museum of Agriculture and Historic Village. The exhibit, which is now a permanent installation, is a tremendously valuable resource for adults and children looking to learn about Georgia history, and about American history. The story of this family, stretching from their early days as sharecroppers, to their struggles as mill workers, to the traumatic placement of seven children in an orphanage, to the lives of those children as adults, and finally to the lives of several subsequent generations, is rich with the details of the ups and downs of American life in the twentieth century.

I wish to extend my heartfelt thanks to the staff and volunteers of the museum for their hard work and caring devotion, to the Tifton community for their generous financial support, and to the members of the Young family for their overwhelming participation. 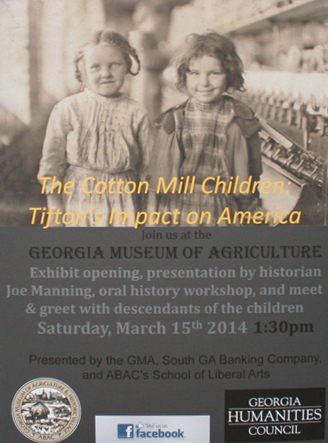 Article about the event, written by the museum

Beautiful article about the reunion