Lewis Hine caption: Isaac Boyett, “I’m de whole show.” The twelve year old proprietor, manager and messenger of the Club Messenger Service, 402 Austin Street, Waco. The photo shows him in the heart of the Red Light district where he was delivering messages as he does several times a day. Said he knows the houses and some of the inmates. Has been doing this for one year, working until 9:30 P.M. Saturdays. Not so late on other nights. Makes from six to ten dollars a week. Location: Waco, Texas, November 1913.

“He came by my house one day and brought me a bicycle.” -Nadine Ovalle, Isaac’s daughter.

Lewis Hine and the National Child Labor Committee were concerned about young messenger boys, especially about the seamy environment to which they were often exposed. That concern is obvious in the caption: “…shows him in the heart of the Red Light district, where he was delivering messages as he does several times a day.” Young Isaac’s occupation was commonly defined as one of the “street trades,” which included newsboys, bootblacks, and children hawking candy bars and chewing gum.

I found Isaac in Waco in the 1910 census, nine years old, living with his widowed mother Fannie, and 15-year-old brother Walter. Fannie’s occupation was listed as “washing,” which may indicate that she was either “taking in wash,” or perhaps working at a laundry. It was later established that Fannie’s name was actually Frances.

Subsequent census information and other official documents established that Isaac was born in Texas, on March 20, 1901. He married Viola Howard about 1922, and had his first child, Jewell, in 1923. In the 1930 census, his occupation was listed as auto mechanic. They later divorced. He died in Waco on May 23, 1966, at the age of 65.

My first attempts to locate descendants ended in frustration. I tracked down a grandson, who didn’t seem to know very much, but he was surprised and interested, so I sent him the Hine photo. But when I called back a few weeks later, his phone had been disconnected, and I lost touch with him. About six months later I tried some more options and was able to obtain a copy of his obituary and some other documents. This finally led me to a daughter, whom I interviewed. She knew very little about her father, but what she did say offers some interesting insights.

Edited interview with Nadine Ovalle, daughter of Isaac Boyett, conducted by Joe Manning (JM), on May 27, 2008.

JM: What was your father doing for a living then?

Nadine: I think he was an auto mechanic.

JM: What was your mother’s maiden name?

Nadine: Viola Howard. My mother and father were divorced when I was six years old. There were eight of us children. I was the fifth one. I had three brothers younger than me. My youngest brother was about two or three months old when my father left.

JM: Where did your father go?

Nadine: I have no idea, but I think he was in prison at one point. My grandmother – my mother’s mother – mentioned it one time. I didn’t see him again till I was 12 years old.

JM: What happened then?

Nadine: He came by my house one day and brought me a bicycle. We had just two quick visits, and then I didn’t see him until I was married and had three children. He dropped by and wanted to see my kids. I didn’t really know him, so I didn’t trust him with my kids. He was there about a half-hour. That’s the last time I ever saw him. When my husband and I were living in Okinawa, I got a message that my father had died.

JM: When you were young, did you often wonder where he was, or was he just sort of out of your life?

Nadine: Well, I had a stepfather, and I thought of him as my father. My mother married him when I was about eight years old.

JM: Did your mother ever talk about your father?

Nadine: She never mentioned him.

JM: Did your father get married again?

JM: Have you lived in Waco all your life?

Nadine: I was married to a man in the service. We lived all over, in California, Michigan and Pennsylvania. We lived in Germany twice, and in Okinawa. He got out in about 1968. We were divorced at that time, and he’s passed away now. I had five children.

JM: Have any of your kids seen the photo of your father?

Nadine: My son called me and said he saw it on the Internet.

JM: What do you think of the photo?

Nadine: I would have known it was him or someone in my family, because he looks exactly like my brothers at about that age.

JM: What did you think of the caption? Lewis Hine was trying to convince people that this wasn’t a good thing for children to be doing.

Nadine: It said he was making $6.00 to $10.00 a week. I showed it to my one brother, and he said, ‘I doubt if he was making that much money. That was as much as he made when he was married to our mother.’ Back then, people didn’t have any money around here. I can remember my mother and stepfather picking cotton. Everybody picked cotton back then. My brother said, ‘There weren’t any child labor laws then. If they wanted to put kids to work when they were four of five years old, they did.’

JM: Mr. Hine said that your father was delivering messages in the heart of the red light district. What do you think about that?

Nadine: I don’t know. The houses he showed in that picture aren’t there any longer, of course. My brother said that was a place near Edgefield, where people that didn’t have any money lived. I don’t think they would have had electricity. I didn’t have electricity until I was about 10 years old. We had an outside bathroom, and we didn’t have running water. We didn’t have a telephone.

JM: Did you know your father’s parents?

Nadine: His mother’s name was Frances. She died when I was three weeks old. My son and I bought a tombstone for her grave. His father was already dead when I was born. I remember Walter, my father’s older brother. He had a son that worked in the oil fields. Walter was married to one of my aunts. He used to be around a lot when I was a kid.

JM: In your father’s obituary, it said he was called Shorty. 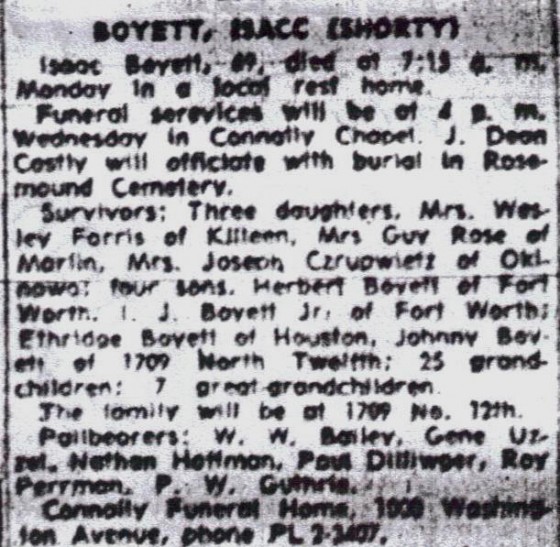