Russell Lee caption: Storekeeper and his wife in front of their store at section 30. “Bust” iron mining town near Winton, Minnesota, August 1937.

Section 30 was a community formed by an iron ore mine. According to information on the website of the Minnesota Humanities Center:

“In 1910, Section 30 was a thriving community, complete with miners’ cottages, hotels, boarding houses, a hospital, dance hall, grocery store, theater, and pool hall. Oppel’s Store, fore-runner of modern shopping centers, was famous throughout the area and did so well that eight clerks, a bookkeeper and two butchers were kept full time. Indians traded there, and silent movies drew rounds of applause from delighted spectators. It was a self-contained community, and during winter months, the only means of communication with the outside world was a dog team.”

“Section 30 flourished until 1923 when shipping rates forced closing of the mine. Miners left the area so fast that the town was literally abandoned and for many years it was a ghost town comparable in appearance to Cripple Creek, Rockerville, or any other in the West.”

This is such a lovely photo. The couple looked very happy and very much in love. But photographer Russell Lee did not identify them, or the name of the store. It was typical for Farm Security Administration photographers to leave their subjects anonymous, for reasons I will never understand. I called the Ely Echo, the local newspaper, and asked publisher Anne Swenson to publish the photo to see if anyone might recognize the couple. She seemed interested, and after I emailed her the photo, she answered:

“Sure, we’ll run it. Looks like it will have to be Section 30 folks who will have to answer this. It must be Oppel’s Store, which was across from the Section 30 Mine. Section 30 was more of a crossroads than anything else, and I believe there was only one store there at the time. After the two big lumber mills closed in Winton, some men got jobs at the Section 30 Mine. It was a very small iron ore mine and operated only for a limited time, unlike the Ely mines which were going strong until 1967.”

“The photo and your letter ran in Saturday’s Ely Echo. I was able to get a person who lives close by that area to come into the office and identify the photo. The woman in the picture is Nell Oppel.”

Within a few minutes, I had searched the census and found the couple. They were William and Nellie (Kinney) Oppel. At the time of the photo, William was about 69 years old, and Nellie was about 66. Both were born in Michigan. They were married about 1894, and had three children. In the 1910 census, William’s occupation was listed as deputy sheriff, but he was listed as a manager of a general store in both the 1920 and 1930 censuses. I was unable to find any living descendants that I could interview, but the widow of Robert Oppel, one of the couple’s sons, lives in town. She is 105 years old.

Note: In case anyone wants to know what a Denver Sandwich is (it’s advertised on the outside of store), this should explain it. 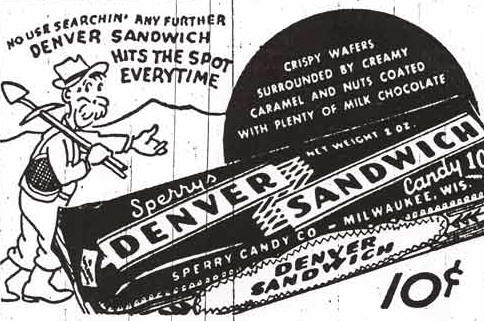 More photos of Opell’s Store, all taken by Russell Lee, in August of 1937, for the Farm Security Administration, a federal government agency. 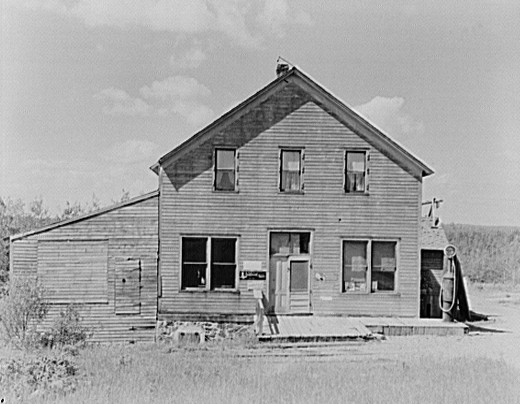 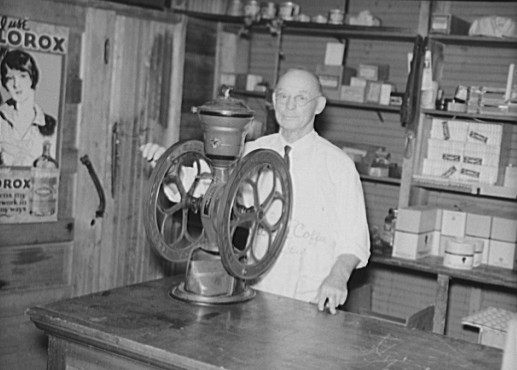 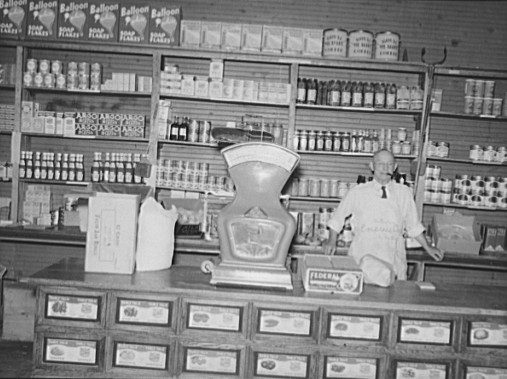