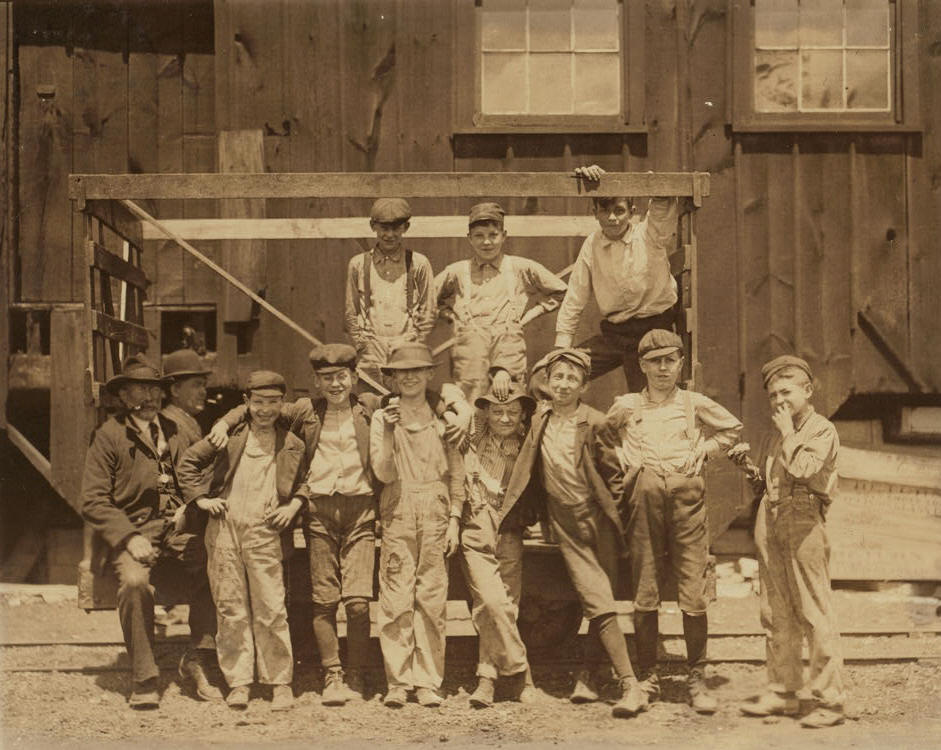 Henry Charles Maul, known most of his life as “Happy,” was born in Alton, Illinois on June 7, 1895. He was the youngest of seven children of Paul and Theresa (Meisner) Maul, who married about 1879. Paul, who died in 1927, was a barber and a prominent member of the community. Theresa died in 1919.

Henry served in World War I and was seriously injured in a gas attack, but eventually recovered. He married Bertha Schneider on May 15, 1923, in Alton. They had three children. For most of his adult life, Henry owned and operated a popular shoe store. He passed away from Huntington’s disease on February 2, 1959, at the age of 63. I interviewed his daughter, Mary Hinton, who could not find any pictures of him.

JM: Did you know that your father was working in a glass factory when he was a boy?

MH: No. I had no idea he worked at the glass works. He never said anything about it to me. I think he only went as far as the sixth grade. I didn’t know his mother or father. I didn’t know much at all about his family.

JM: Where were your parents living at that time?

MH: In Alton, on Franklin Avenue. My parents built a house there.

JM: In the 1930 census, your father was married to Bertha, and they had two children, Henry and Virginia.

MH: They had three children altogether, Henry Eugene, Virginia Lee, and me. My brother was a prisoner of war for a year in World War II.

JM: And your father was running a grocery store.

MH: I heard him say that he owned a grocery store on Central Avenue.

JM: They told the census taker that they married in 1923. Does that sound right?

JM: In your father’s 1942 draft registration, he was listed as running Maul’s Shoe Store.

MH: That’s right. It was the main shoe store downtown. I worked there. It was the only place I ever worked. I remember that during the war, you had to get stamps in order to buy shoes.

JM: How long did he own the store?

MH: Until he got sick. Then someone bought it, and they changed it to Paul’s Shoe Store. They changed just one letter. I worked for them, too.

JM: When did your father die?

MH: On February 2, 1959. He’s buried at St. Joseph’s Cemetery in Alton. He had Huntington’s disease. My sister died from that, too. Back then, they didn’t know much about it.

JM: I found some interesting things. Also in his 1942 draft registration, your father listed his phone number. It was 2-1244.

MH: Yea, I remember that number.

JM: I found the address of your father’s shoe store. It was 121 West 3rd Street.

MH: Yea, that’s right. It was right across from the National Bank.

MH: I don’t know. He had that name long before I knew anything about it.

JM: In the photograph, he looks like he was clowning around. He looks like someone who would be called Happy.

JM: Even though he only got as far as the sixth grade, he must have been smart enough to run a store.

MH: He did all the book work, so I kind of figured he was smart. And he had perfect handwriting. When he was in World War I, he was gassed, and he was blind for a while. How long he was blind, I don’t know. He used to wear glasses, but his eyes didn’t really bother him. Every once in a while, he’d get this bad cough, and he thought he was going to die, and that was because of the mustard gas.

JM: I found a 1915 article about your father in the Alton newspaper. It says that he is the owner of a new three-cylinder Indian motorcycle.

MH: I know he had a motorcycle, because I remember my mother saying that Dad was driving her sister on the back of his motorcycle, and she fell off and he didn’t even know it. That’s what my mother said. I’m sure it’s true, and I guess she didn’t get hurt.

JM: How long did it take for him to realize she was gone?

MH: I have no idea. I thought it was kind of funny.

JM: I also found a 1919 newspaper article that said he was wounded in the leg by shrapnel and badly burned by mustard gas. He was a dispatch boy and used a motorcycle to carry messages.

MH: I never knew anything about him being burnt. He didn’t have any marks that I know of.

JM: Was he busy in the store most of the time?

JM: Did he ever have any time to do other things?

MH: Not really, except going to church.

JM: So does that mean that you didn’t have a chance to spend much time with him?

MH: I didn’t have that much time with him. Even on weekends, he’d be at the store. I’d get him to take me swimming at Wood River once in a while. He liked to fish and all, but my mother didn’t like to do that stuff, so she didn’t go.

JM: But you were with him at the store when you worked there.

JM: How many years did you work there?

JM: How many years did your father live after he stopped working?

MH: Maybe several years. With Huntington’s disease, there’s no cure, and it’s progressive. When you first get it, you don’t know it. So I don’t know really know how long he was ill.

JM: Did your mother work at the store?

MH: Sometimes. But she didn’t work at any other jobs.

JM: What do you miss about your father?

MH: I just miss being with him. I miss everything about him. It was really hard for me when he died.

According to information published by the University of Toledo Library, the Illinois Glass Company, after a rough start, was purchased in 1873 by Edward Levis and William Eliot Smith. It was based in Alton. The company grew quickly, and the owners considered moving operations to St. Louis, where raw materials were cheaper and more accessible. But the city of Alton convinced them to stay by giving them a site near the river and the railroad. Over the next 30 years, the company grew exponentially, the workforce expanding from 60 employees to 3,200.

In 1909, after the deaths of Levis and Smith, the company was taken over by five of Levis’ sons, who installed automatic bottle machines made by the Owens Bottle Company, and discontinued the hand-blown manufacturing process altogether. By 1928, the Alton plant was the largest bottle manufacturing factory in the world. A year later, it merged with Owens and moved its headquarters to Toledo, Ohio. The company no longer has any operations in Alton.