The Barataria Canning Company was founded in 1885 by Jewish businessmen from New Orleans. The company packed oysters, shrimp, figs, and vegetables. The following is from Along the Gulf, written by Charles L. Dyer, and published in 1895:

“This company (Barataria Canning Co.) was organized about ten years ago by New Orleans parties, the officers being H.R. Gogreve, president; I. Hechinger, vice-president; H. Bentz, treasurer; I. Heidenheim, secretary, and H. Edwards, manager. Of these, only the two later gentlemen reside in Biloxi, Mr. Edwards having the active management of the operating department of the business, while Mr. Heidenheim has charge of the office in addition to that of already stated of secretary. To this company Biloxi is indebted for many ideas regarding the profitable up-building of the canning industry. The Barataria Canning Company makes a specialty of shipping raw oysters in lots to suit to all parts of the United States, and also handle large quantities of picked shrimp. They are also packers of oysters and shrimp, putting up many brands which are favorably known throughout the country and portions of Europe. One of those brands of pickled shrimp known as ‘ready Lunch’ is a departure from the old methods of canning shrimps dry, these being put in a liquid of delicious flavor and making them very popular both for table use and for picnics, lunch, parties, etc. Another brand called ‘Pride of the Gulf’ put up dry in the muslin bag has a large sale also, these being used primarily for salads, mayonnaise, etc. The pickled shrimps are prepared by a process entirely their own. In addition to this the company cans special and private brands of oysters. During the busy season this factory employs about 400 hands, 200 of which are employed upon the boats, handling the raw products, while 200 are kept busy in the factory. Many of these people are brought from Baltimore and are returned to their homes at the close of the season should they wish it, at the expense of the company. The Barataria Company however has built a large house capable of accommodating 35 families or 175 persons, when the workmen wish to remain in Biloxi between seasons. They are given rooms rent free. Many families, as a matter of course, avail themselves of their privilege. The Barataria Canning Company were the first to introduce shell culture for the propagation of oysters in this part of the country and have been successful in their venture, which affords fresh stock for raw trade. This company has an oyster plant under cultivation in this manner of about 100,000 barrels, and it is from this plant that the major portion of their supplies are drawn. In the oyster department of this business alone, this factory has a capacity for handling 800 to 1000 barrels per day, and as their payroll runs from $3000 to $4000 a week during the greater portion of the year, some idea of the magnitude of the business done may be obtained.”

Lewis Hine’s photographs of small children working in canneries represent one of his most compelling cases against child labor. Some of his photos show extremely sub-standard worker housing, calling to mind the proverbial shanty towns in third world countries. The girls appear in six of Hine’s photos. 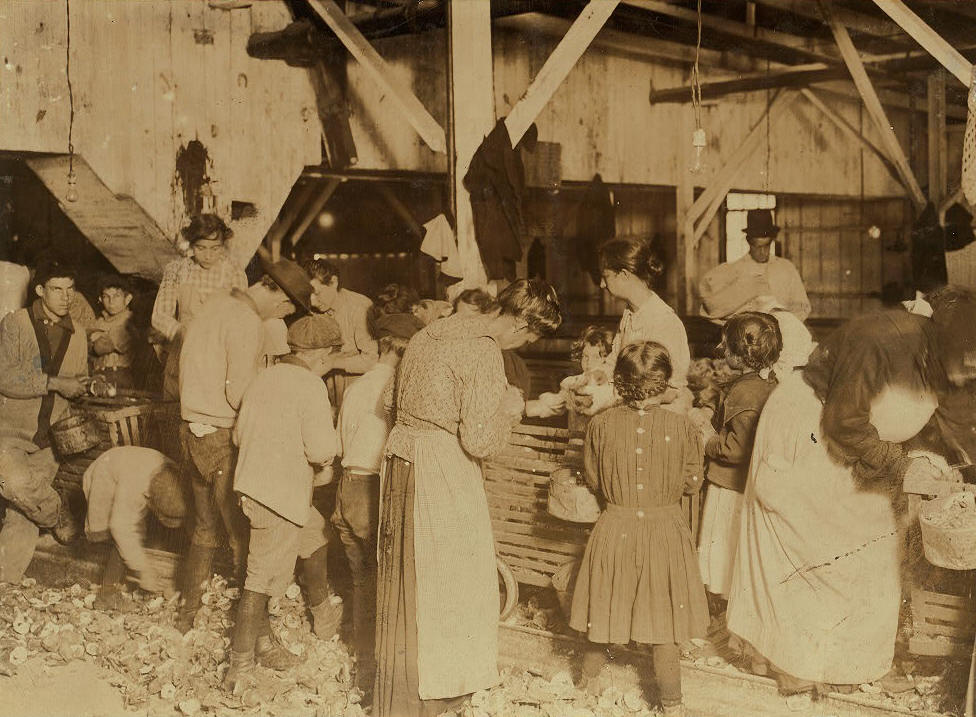 According to the 1910 census, 5-year-old Gertrude, and 3-year-old Mildred were living with their parents, Philip and Estelle (or Estella) Kron, on East Beach Street in Biloxi. Both parents worked at a cannery. It was common not to list occupations for small children, even if they were working, since the parents would have been complicit in violating the Mississippi child labor law enacted in 1908.

Philip and Estelle married in New Orleans on April 15, 1901. Gertrude and Mildred were their first two children. A baby girl was stillborn in 1916. At the time, the family was living on 405 Crawford Street, right on the shores of the Gulf, where it appears the Krons were working for the Dunbar & Dukate Canning Co. and living in company housing. 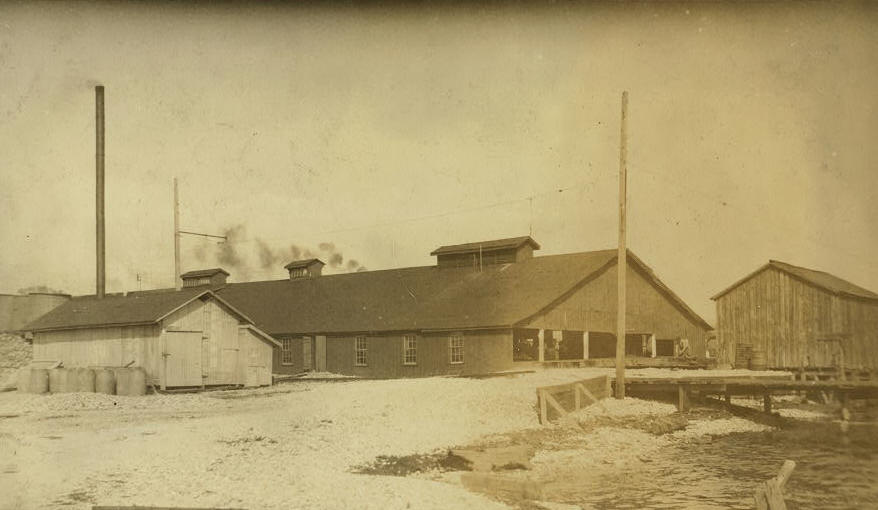 Lewis Hine caption: Dunbar & Dukate oyster cannery. According to the testimony of a number of the parents and children, this factory reverses the child labor law to suit its own convenience, and probably to avoid detection. Instead of excluding the young children from work before six o’clock according to the law, they let the young children work from four until seven, and then send them home. Biloxi, Mississippi.

On September 15, 1918, Estelle died in childbirth. The obituary, as it appears on FindAGrave.com, states: “Estelle died shortly after giving birth to baby Mary, who lived only 12 hours and was buried in the same coffin as her mother. Cause of Estelle’s death (was) acute Bright’s disease secondary to pregnancy.” Bright’s disease is an obsolete term for a type of kidney disease. Estelle and Mary, and the stillborn baby from 1916, were buried in Biloxi City Cemetery. I could find no record of any other children. I was unable to locate a death record for Philip. None of the surviving family appears in the 1920 census.

Mildred Emma Kron married Philip Felix Keeper on May 21, 1924, in St. Michael’s Church in Baltimore. According to the 1930 census, they were renting an apartment at 1729 E. Lombard Street, in Baltimore, which was a tenement built in 1900, and is now part of a row of restored, multi-colored condos. Felix, as he was called, was a clerk in a meat store. Living with them were Mildred’s brother Philip, and Inez Kron, whose relationship is not clear. Gertrude Rosalie Kron married William Harrison (year unknown) and settled in Philadelphia.

The only relative I could find was Daniel Mauk, whose late wife, Mildred Mauk, was the daughter of Philip Kron, brother of Mildred and Gertrude Kron, the girls that Hine photographed. He did not have a lot of information, and does not know any living descendants that would know anything else.

He told me that Mildred and Felix owned a grocery store in Baltimore, and later in the Baltimore County village of Edgemere. They had no children, but when her brother Philip died at the age of 44, she raised his son, also named Philip. He said that Mildred and Felix were “fairly wealthy,” and that Mildred had lots of jewelry. When they had the store in Edgemere, they lived in a house attached to the back of the store, and remained there when they retired. They also owned waterfront property near the store and rented it out.

Though we may never learn anything more about them, we do know that Mildred and Gertrude survived what must have been a harrowing childhood, appeared to enjoy a relatively comfortable and stable life, and lived far longer than most of us would have guessed. 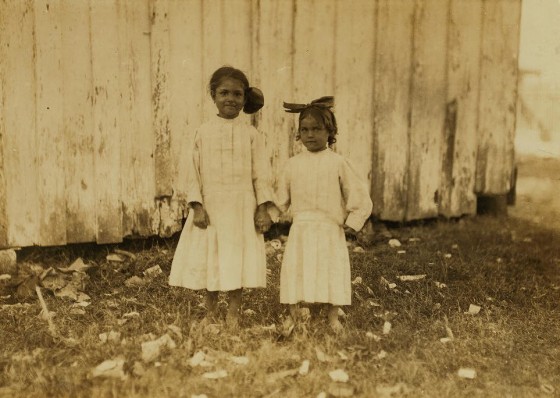