“My parents always stressed the importance of their children getting an education. They went out of their way to make life better for us than they had it. My mom was from a farming family of 12, and she never finished eighth grade because she was one of the older girls in the family and had to take care of the rest of the kids. My father graduated from the eighth grade in a Catholic school, but that was as far as he went.” -Ronald Umhoefer, son of Hugo Umhoefer

“The National Child Labor Committee has set itself this great task. It is a militant and a constructive organization. It seeks to put an end to the national disgrace of child mistreatment, and at the same time to promote every enterprise that looks toward a wiser and more efficient education of our youth. It has already taken thousands of children out of the mills. It is now concentrating its attention upon the larger task that remains, that of securing freedom and better conditions for the children who labor on the farms. The most progressive farm organizations heartily favor this beneficent undertaking, but the active co-operation of our entire citizenry is demanded if the work shall be carried to a successful conclusion.” -Felix Adler, The American Child, Volume 3, National Child Labor Committee, 1921

Despite having been born and raised in Wisconsin (Oshkosh), Lewis Hine took only 11 photographs of child laborers in the state. Ten were of children working on beet farms; the other one was of members of the Umhoefer family who, it turns out, lived on their parents’ dairy farm.

Hine took many pictures of children, some as young as four and five, that were seasonal pickers on fruit and vegetable farms. They often moved with their families from place to place, following the crops from south to north. But other photographs were of children working on farms owned or rented by their parents, an altogether different situation which seems benign in comparison, and often provokes skeptics who question the validity of referring to it as child labor. Felix Adler’s comment above might help to explain Hine’s motives.

Menomonee Falls is 20 miles northwest of Milwaukee, and has a population of about 30,000. It is the home of the corporate headquarters of Kohl’s, a national chain of department stores. In the first half of the 20th century, it was one of hundreds of towns in Wisconsin that were dominated by dairy and crop farms. Anyone who pays attention to license plates knows that Wisconsin is known as Dairyland. About a month before the Umhoefer children posed for Hine, their parents might have read the following article, which appeared in the Menomonee Falls News. 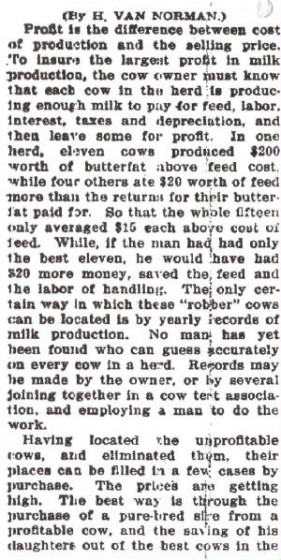 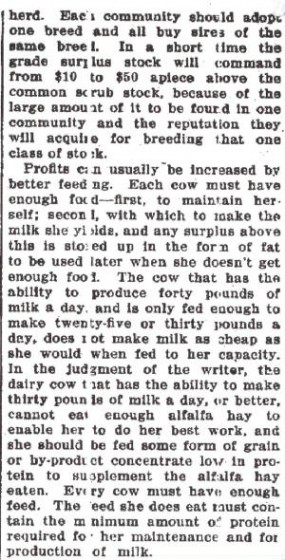 I looked in the census and found Joe Umhoefer and his family living in Menomonee Falls in 1920. Based on the ages of the children, I was able to figure out that the boy in the photograph was Hugo. I found his death record, obtained his obituary, and contacted one of his sons, Ronald Umhoefer. He was familiar with the picture. He sent me a copy of his family history, which was compiled by Gary Umhoefer.

Benedikt Umhoefer, his wife Margaretha and their three boys, Joseph, Theodor and Gregor, sailed from their homeland in Bavaria to New York City in 1848. Almost immediately after they landed, they headed to Milwaukee.

In the 1840s, Wisconsin was one of the end points on the northern route leading from New York City. As that port increasingly dominated in terms of immigrant arrivals, so did the number of potential Wisconsinites increase. But there were a number of other reasons for choosing Wisconsin: promotional publications, land prices, earlier German immigration, suffrage laws and low taxes.

The Umhoefer’s journey would likely have taken them on a steamboat up the Hudson River, on a train or canal trip to Buffalo, and on a steamboat ride on the Great Lakes. The family would have traveled about 10 days, right after experiencing their grueling trip across the ocean. They settled near Menomonee Falls, where they established a farm. Nine years later, in 1857, son Gregor married Anna Marie Eichen, whose family had emigrated from Cologne. Gregor was already living in a log house he built in 1856, which sat on 80 acres of land.

JM: Where were your parents living at that time?

RU: We were living on the same farm that my dad was hoeing on in the photograph. He had 10 or 11 brothers and sisters, but he was the only one that stayed on the homestead and continued the family farming tradition. He continued doing that until 1959. He finally had to quit farming because the State of Wisconsin forced him out. Part of the original 80-acre farm was adjacent to an interstate highway. When they constructed it in 1955, it chopped off about four acres at the corner. After the state realized how much more traffic the highway had created, and that there was a big intersection there, they put in a cloverleaf. That took out another 12 acres, including the barn. The cloverleaf came within 90 feet of the log cabin that was built on that property in 1856. That put him out of business.

I was in the eighth grade then. It was tough for my father to have to give it up. He had an auction and sold off all the farm equipment, but he stayed on the property for about three years. And then he sold the rest of the farm. I guess I could see it coming, because the small farmer was already having trouble making a living. If it hadn’t been the highway, it would have been something else that would have put him out of business. For a few years, we had been sharing our equipment with another farmer down the road.

The whole thing coincided with the expansion of the suburbs around Milwaukee. People were moving out of Milwaukee, and there was a big building boom in Menomonee Falls. The interstate made that possible. He kept one lot on the property and built a home. That home is still there and is occupied by my brother.

JM: What did your father do for a living after he closed the farm?

RU: Initially, we had three or four acres, and he had a brother-in-law who lived a couple of miles away that had 30 acres. So they vegetable farmed. They would get up at 5:00 in the morning to pick corn so they could sell it by the side of the road. He did that for three or four years, and then he got a helper’s job with somebody that he knew who was doing surveying. He worked at that job until he was in his late sixties.

JM: When you were born, how much had the farm changed since the time the Hine photo had been taken?

RU: Not much. Part of it was on one side of Fond du Lac Avenue, which at the time was the main road going from Menomonee Falls to Milwaukee. That’s where we had the house and barns. On the other side of the road, there was a pasture and the farming fields. We were basically a dairy farm, and we raised crops to feed the cows, about 25 to 30 head. We always had food to eat, but we didn’t have much money.

JM: Did you grow up doing exactly the same thing your father did when he was growing up?

RU: Yes, when I wasn’t in school. My parents always stressed the importance of their children getting an education. They went out of their way to make life better for us than they had it. My mom was from a farming family of 12, and she never finished eighth grade because she was one of the older girls in the family and had to take care of the rest of the kids. My father graduated from the eighth grade in a Catholic school, but that was as far as he went. He had some other jobs before he eventually stayed on the farm. He told me that when he was a young man, he worked as a window washer in Milwaukee. That surprised me, because it was a 20-mile ride from his home to Milwaukee. Back then, that was a long way to travel just to wash windows.

JM: Did you go to college?

RU: Yes, but Mom and Dad couldn’t help me much because they couldn’t afford to. I went to a tech school for two years, and then I transferred to the University of Wisconsin-Whitewater, and went on to get an accounting degree and my CPA. I was the only one of the three boys that went to college. Then I was drafted and went to Vietnam. But I never saw combat because they put me in administration.

JM: You had already seen the photo of your father when I contacted you. How did you first find out about it?

RU: Someone who was doing research on their family saw it, and sent it to us. Looking at him in the picture, he was dressed pretty much like he always dressed when he worked on the farm. He always had a hat on to protect him from the sun, and he usually wore long sleeves. His three sisters in the picture all have the same kind of dresses on. Martha is in the middle. The one to the left is Clara, and the one to the right of Martha is Isabella. The one on the far right is not related. Clara married a fellow named Keeler, and they lived a half a mile from the farm. Martha got married to a man named Klein, who worked in a factory. Isabella married John Stoffel, and he worked for the village of Menomonee Falls.

JM: What did your father do after he retired?

RU: He maintained a very healthy garden. He didn’t sell the vegetables. He grew them and canned them. He was still in that routine, being a farmer. We had about three acres of land left. He had raspberries and strawberries, sweet corn, peppers, and so on. He died at the age of 85 (1989). He had a stroke when he was 83. His last few years were pretty rough. He was paralyzed, and he lost his ability to speak. My mother died in 1994.

My father was a very quiet man. He didn’t share a lot of things. I don’t remember ever being hugged by him. I think he was from that era when it was common for men not to show their emotions. But I think of all the things he did for me. When I was a kid, he would get up early in the morning and milk the cows, and then take me to school every day. That was quite a sacrifice.