You are here: Home / BOOKS & CDs / Disappearing Into North Adams 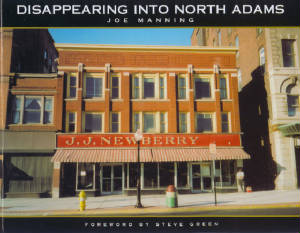 “I can sit there and see where North Adams used to be,” says Peter Cronin, from the deck of his hillside home. Author Joe Manning understands. He has been writing about North Adams for nearly five years, and he achieved wide acclaim for Steeples, his first book about this small city in the Berkshires.

Starting in 1968, North Adams residents witnessed a devastating urban renewal program that wiped out most of its commercial and residential buildings downtown, many of them historic landmarks; but the program was unable to deliver on the promise of new retail development. Eighteen years later, Sprague Electric Company, which had employed 4,200 workers in 1968, abandoned its huge factory located two blocks from Main Street.

Many natives moved south, and once-thriving neighborhoods began a slow and painful disintegration. It wasn’t until the Massachusetts Museum of Contemporary Art (MASS MoCA) obtained funding to locate in the abandoned Sprague mill that people began to feel a sense of hope. When it opened in 1999 to rave reviews and huge audiences, MASS MoCA became the largest center of contemporary of art and technology in the United States; and North Adams is now the talk of the art world.

Through the lively, heartwarming, and often funny interviews with residents, old and young, the nostalgic archival photographs, the author’s insightful essays and poetry, and his own impressionistic snapshots, the sad but ultimately uplifting story of the rebirth of North Adams comes to life.

But this book is also about the author’s spiritual journey in this haunting and strangely beautiful city. Since visiting North Adams for the first time in 1996, Joe Manning has found a renewed sense of purpose in his middle years and a second career as an important writer, photographer, and community activist. “God has blessed me,” he says, “with the people of this city; people who possess a disarming spirit of trust, graciousness, decency, and optimism.” Like the author, readers of this marvelous new book will find themselves Disappearing Into North Adams.

Disappearing Into North Adams has 380 pages; a full-color cover; over 190 photographs (24 in full color); nearly 70 interviews; over 60 essays, stories, and poems by the author; and many surprises. The author donates $2.00 of each sale to the North Adams Public Library.

ORDER NOW directly from the author

Reviews and comments from readers

“Disappearing Into North Adams is a wonderful, personality-filled account of a period of change in a small New England mill town. Joe Manning has a poet’s eyes and ears for the small things that matter: the inflections of speech, the loss of architectural artifacts, the threatening power of fresh ideas. He knows that commercial advertisements disappearing into the walls of brick buildings are rare and beautiful. The book is full of personal recollections that Manning wins through careful, caring interviews. Interwoven with the interviews, placed like fossils, are poems, photographs and short essays, most by Manning, who is a fine writer. The book has a gritty feel of the reality it absorbs. It is both a richly layered historical record and a piercing look forward.” -Joseph Thompson, Director of the Massachusetts Museum of Contemporary Art

“Joe Manning is a generous writer and listener. He invites us to walk the streets of one small city in America with him and compels us to listen to the stories this town has to tell. In the end, we learn as much about the author and about ourselves as we do about life in a specific time and place.” -Elizabeth Winthrop, author of fifty works of fiction for adults and children, including Island Justice, In My Mother’s House, The Castle In The Attic, and Shoes

“Disappearing Into North Adams is a brilliantly executed and engaging account of a scrappy Massachusetts mill town attempting to remake itself. (It is) replete with real expressions and reflections from residents, an indication of how hard Manning listened to understand life’s rhythms in North Adams. Manning’s description of the coming to town of the Massachusetts Museum of Contemporary Art is an important account of the ways that life-long community residents, developers, and newcomers can work productively for the re-use of abandoned industrial space. (His) deft touches as an interviewer capture the personal hardships and life-altering confusions associated with job loss and economic dislocation. For anyone interested in learning more about the daily lives and thoughts of the people who built the country and then saw their handiwork threatened with extinction, Disappearing Into North Adams with Manning is a meaningful trip to take.” -Robert Forrant, Associate Professor, Department of Regional Economic and Social Development, University of Massachusetts Lowell, as published in The Public Historian, Spring 2004

“Joe Manning has written another tender and loving portrait of the city and its residents who in the midst of change have continued to enjoy a sense of community. We hear from old-timers and younger residents and come away with a sense that when folks work together, community not only survives, it thrives. Joe has taken a long look at this community and gives us what is finally a story of the expectation that when people act for the common good, community in the best sense of the word will prevail.” -Steve Green, Professor of Sociology at Massachusetts College of Liberal Arts

“Disappearing Into North Adams is magnificent. Joe Manning has created a work that will outlive us all. A hundred years from now, people will still be reading, studying and enjoying this book, and admiring the passion and insight of the man who wrote it.” -Mark Rondeau, Editor of The Advocate

“Disappearing Into North Adams offers a vision of how the ups and long downs of places can be experienced by a wide range of people. C. Wright Mills, America’s famous sociologist in the 1950s and 1960s, wrote a book called The Sociological Imagination. He defined the sociological imagination as the intersection of history and biography, and he suggested that in order to understand social structural, we need to constantly look at both history and biography. That is exactly what Manning does. He looks at history through the biographies of individuals as they lived through the changes that occurred and continue to occur in North Adams. Every place needs a Joe Manning to donate time and energy to reconstruct the history of the past in order to understand the present.” -Joseph Sullivan, sociologist and lecturer at Rensselaer Polytechnic Institute

“I see lots of texts about community and community change, but rarely do I see such an honest appraisal of the changes that have occurred in North Adams. This is because the author, Joe Manning, uses the people’s words and recollections throughout the book as he tells the story of this American mill town growing old. I would highly recommend Disappearing Into North Adams as a text for students of sociology, anthropology, social work, community development, and community organization. Through interviews, pictures, and the author’s essays, this book tells a story that all Americans should know about.” -Al Bashevkin, Executive Director of the Northern Berkshire Community Coalition and adjunct faculty member of Massachusetts College of Liberal Arts and UMass Medical School

From the author’s introduction

I believe that all of us have a spiritual home, and that most of us encounter it at some point in our lives. However, only some of us are lucky enough to recognize it when we see it. When I visited North Adams for the first time on Sunday, July 21, 1996, God said to me, “This is your spiritual home. Come back.” Somehow, I must have heard Him.

On a lush, green, cloudless summer day, my wife and I drove two hours from our home in Torrington, Connecticut, to see an art exhibit at the Massachusetts Museum of Contemporary Art (MASS MoCA), a developing project we read about in our local newspaper. The article briefly described it as “an art museum that is locating in a complex of abandoned factory buildings.”

When we arrived, I was struck by the quiet streets and strange beauty of this small city that sits deep in the shadows of the Berkshires. We parked on Main Street and walked around for a few minutes until we found the museum, only to discover that the newspaper article was incorrect, and that the art exhibit was scheduled to begin the following weekend. MASS MoCA was closed, and it appeared to be nothing more than a bunch of faded brick buildings in desperate need of repair.

We could have jumped into our car and headed home, but my wife and I elected to walk around some more, a decision that was to change my life. After a long afternoon of wandering and discovering, we drove home, booked a motel for the following weekend, and returned Saturday for the art exhibit.

We learned that MASS MoCA was planning to open in 1999, and that it would be the largest contemporary art museum in the United States. I chatted with several people on Main Street, including a store owner who lamented about the city’s decline over the years. “We’re on our way back now,” he said, “and MASS MoCA is the reason.” In less than three weeks, I was on my way back, too; this time with a camera, a pen, and a pocket notepad.

A year later, I had written and published my first book, Steeples: Sketches of North Adams, which contains interviews I conducted with residents, poems I wrote about the city, and photographs. Steeples turned out to be a very popular book; but more importantly, it gave me the opportunity to make many wonderful friends and to find a spiritual home.

Why North Adams? For this author, there is so much to tell. Echoing in the soft mountains is the classic American story of struggle and triumph. The last thirty years have been an especially challenging time. Starting in 1968, residents witnessed a devastating urban renewal program that wiped out most of its commercial and residential blocks downtown, many of them historic landmarks. Old-timers stood on street corners with their grandchildren and watched as buildings disappeared into dust; buildings these old-timers probably watched being built, stone by stone, with their grandfathers.

Sadly, city officials were unable to deliver on the promise of new development. For many years, the south side of Main Street was in the words of one resident: “The most depressing place I’d ever been in…a big, dirty parking lot.”

It wasn’t until MASS MoCA obtained the long-awaited funding in 1995 that people began to feel a sense of hope. Since the museum opened in 1999 to rave reviews and huge audiences, North Adams has become the talk of the art world and a cultural mecca that is attracting creative young people.

Order Disappearing Into North Adams with credit card, via PayPal. Please fill out the form below and click Submit.