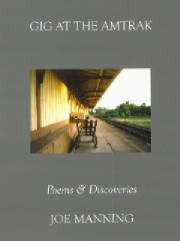 In Gig at the Amtrak: Poems & Discoveries, Joe Manning plays words like a jazz musician plays the saxophone — edgy, earthy, blue-noted, a little behind the beat — like Hank Mobley, who inspired the title poem. And especially in the poetry born of his journeys in North Adams, Massachusetts, he paints with the faded colors of Edward Hopper’s urban landscape. Haunting, stark, often very funny, his verses are spiced with scraps of overheard conversations in cafes, candid comments from locals, and the author’s sympathetic and penetrating observations. But Manning offers us much more than his poems. Always the unconventional writer, he carefully and cleverly weaves in curious and sometimes heartbreaking old newspaper articles and stories he discovered while doing historical research.

ORDER NOW directly from the author

“Joe Manning weaves together his poetry with stories from old newspaper clippings to show us the human connections between days gone by and life as it is lived now in the coffee shops and train stations and along the riverbanks of small towns. His poems capture so perfectly the natural cadence and rhythms of everyday people that we feel as if we are eavesdropping. We come away reminded that community is as essential to our well-being as the air we breathe.” -Elizabeth Winthrop, author of over fifty works of fiction for adults and children, including Dog Show, Island Justice, The Castle in the Attic and Dumpy La Rue

Author Joe Manning’s latest offering Gig At The Amtrak knits prose and poetry with historical reflection and fresh perspective to create an artful, thought-provoking mosaic of ordinary people and the extraordinary moments they live. Manning’s original poems are the focus of the 102-page volume. “I felt it was time to establish myself as a poet,” Manning said during a Friday morning interview. The poetry is Manning’s, but the voices whose words pepper the page belong to countless numbers of folks Manning has encountered, including dozens of North Adams residents.

“A great songwriter once said ‘I don’t write songs, I find them,'” Manning said, and explained that for years, he has written down interesting phrases and descriptions he’s heard during conversations. “I’ve always thought that these people are more eloquent than I ever could be,'” he said.

News articles copied from old newspapers mingle with the poetry and deliver context to Manning’s work. “Little Immigrant’s Sad Lot,” originally published in the Daily Iowa State Press in 1899, relayed the story of Alice Knearsey, a six-year-old Irish immigrant whose father apparently killed her mother during a voyage across the sea to America. Alice, according to the report, was destined to return to Ireland and face life without either parent.

“I had my chance….when I was nineteen/Earl wanted to go to California when we got married/but I wasn’t sure/so we didn’t/He wound up at Sprague’s/but he died before he could retire/And now I live in the school/I used to walk to every morning/They call it elderly housing.”

The poem continues on to consider “what is” against “what might have been.”

A quest for his own genealogical roots led Manning to discover published snippets of ordinary life dating back to the mid-1800s, he said. While cities and towns and economies and cultures evolve through time, the essence of humanity remains constant, he said.

“While searching [the Internet] for the name Manning, I would come up with these old news articles from small communities in the 1800s,” he said. “I would read these stories and they were a wonderful window on history. These weren’t major news stories with famous quotes, but they were these little vignettes of life. And I would say ‘these are a lot like my poetry, slices of life.'”

Numerous articles were included in the book because “I think I am making a statement that these so-called little lives were very important,” Manning said.

“When you are growing up, you think that history was fashioned by famous people and big events,” he said. “But everyone has made history, everyone has contributed to history.”

Manning’s own ancestry illustrates his point: his great-grandfather Joseph H. Manning was one of nine children born to an Irish immigrant couple, and the sole surviving son of the Civil War. The awe lies within the “what ifs.” What if Manning’s great-grandfather hadn’t survived? What if the five brothers had not been killed?

Life’s precarious nature is acknowledged through the book’s title poem. Manning said that as a “tremendous fan of jazz,” he is enamored with Hank Mobley. Despite international acclaim, Mobley died homeless in a railroad station in 1986. One of Manning’s daughters is a jazz musician, and Manning’s thoughts have turned to her.

“I started thinking about my daughter and thinking ‘will this be her fate?'” Manning said.

“I wrote this kind of fantasy about him trying to eke out a living at the train station,” Manning said. “My daughter showed it to her college professor and he loved it. That’s what gave me the confidence to write poetry.

Many of the poems are about North Adams, as evidenced by titles including “Eagle Street,” “Furnace Street,” and “The Hills Have Their Way.” Manning’s love of and fascination for the city have generated two previous books: Steeples and Disappearing Into North Adams.

While Manning resides in Northampton, he is a frequent city visitor, and when asked, acknowledged that the city, its history and struggle to shed a “dying mill town” image and cloak itself in an artistic mantle may well serve as his “muse.”

He has evolved as a person and a writer since his first city junket about nine years ago, he said.

“I look at things differently now than when I first came,” he said. “This is not just a place to write about, this is where I see my friends. This is where I found myself, my spiritual home. And I like what it [the city] is becoming.”

“I think I’ve done something different with this book,” Manning said. “I think I was using the tools I am best at. An artist notices things that other people don’t notice and can make people see it, for the first time, or differently. It’s a great gift, and you’d be a fool not to use it.”

Introduction by the author:

Many of us experience the sensation of driving the same route to work every day, and when we reach our destination, we have no recollection of making the trip. We can’t remember passing a single landmark.

Like that trip to work, the study of history tends to be more about destinations and less about the little things along the way. But it is the mundane details of life that fill most of our time on this planet, details our descendants will someday wish we had documented.

As a writer and photographer, I try to spend as much time as I can carefully observing and recording all the seemingly uneventful stops on my journey through life. Extensive research of my family history has made me wish my ancestors had done the same.

In my poems, I try to speak in the voices of the people I have met or overheard, or in my own voice as a participant observer. The old newspaper articles and family stories that are scattered among the poems are just a sample of the many I have encountered on various genealogical sites on the Internet. They are like the scraps of life that wait to be found in the attics of grandparents. Some make me cry, some make me laugh, others just make me wonder. Like my poems and photographs, they are unexpected discoveries.

at the bottom of the street

fades into its final century,

while the big yellow machinery watches nearby.

For those who knew its dark walls,

it is still a living house.

The sharp bang of radiators,

the whistle of winter winds,

the squeak of stairs under scruffy shoes,

the sighs of a thousand long sad looks out the window;

They will not be carried away

For those who care,

there is another house,

and around the corner,

with plywood nailed across the windows and doors,

It used to snow

when we were kids,

It would start with a few flakes

and grow into a windy swirl.

When I saw you

for the first time in forty years,

I remembered the snow,

You waiting at the top of the hill,

my eyes fixed on yours

as I pulled the sled behind me.

Order Gig at the Amtrak with credit card, via PayPal. Please fill out the form below and click Submit.