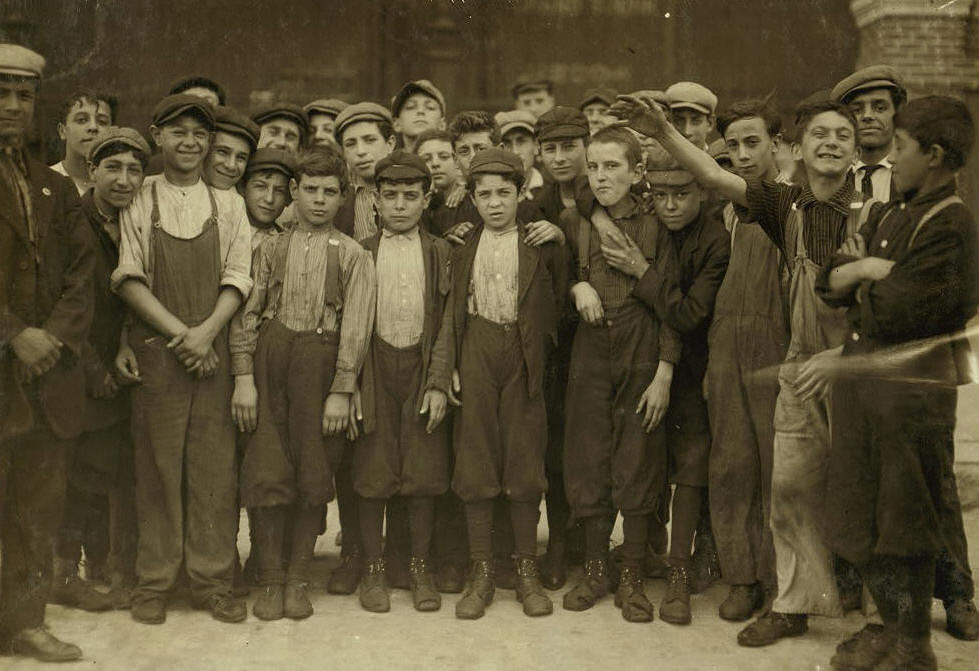 Lewis Hine took 15 photographs of child laborers in Lawrence in November of 1910, mostly of textile mill workers. He returned in September of 1911, and took 51 more of children working in textile mills: the Ayer, Wood, Washington, and Everett mills. Unable to gain access to the mills, he photographed the children standing nearby, or in their neighborhoods. Neither Hine nor anyone else could have predicted that, four months later, the lives of every one of those children would be turned upside down. On the morning of January 12, 1912, workers poured out of the Everett Mill, beginning one of the most important and dramatic strikes in American history.

Exactly 100 years later, on January 12, 2012, citizens of Lawrence marched out of the Everett Mill at 9:00 in the morning and proceeded to a ceremony at Lawrence City Hall, beginning a year-long celebration of what is now known as the Bread & Roses Strike. In the fall of 2011, I was asked by the Centennial Committee to track down the lives of some of the Lawrence child laborers in the Hine photographs, and to present my work at an exhibit at the Everett Mill. That exhibit is scheduled to open in April. You can see some of the stories by clicking the link below.

Stories of the Lawrence Children

Excellent article about the strike, and about my work in Lawrence

A brief overview of the Bread & Roses Strike

Entire text of Congressional testimony in 1912 regarding the Lawrence strike

The following is an excerpt from testimony at the US House of Representatives in March 1912, regarding the Lawrence strike. The entire testimony can be viewed for no charge in Google Books, at the link directly above.

Mr. Chairman, a few days ago the entire country was startled by the story carried in the newspapers to the effect that the police powers of the State of Massachusetts, including those of the City of Lawrence, Mass., were being used to forcibly prevent the children of strikers from being sent out of the city of Lawrence and out of the State of Massachusetts into other States, where homes had been provided for them during the period of the strike which is now in progress at Lawrence. That statement has not been denied, and it still stands, so far as we are advised, as a statement of fact.

Since the beginning of our modern industrial development there have been many conflicts between capital and labor, and during these conflicts frequently some very arbitrary things have been done, but, so far as I know, there has never occurred in the history of trade disputes in this country any conditions approaching or even approximating the conditions which are alleged to exist in Lawrence, Mass. A strike has been on there for a number of weeks. Everybody knows that when a strike period is on there is want and privation; there is hunger and suffering on the part of those who are making the contest, and those who are engaged in the conflict feel that their children would be better provided for and better cared for by sending them to the homes of others who are working and are able to provide for them until the strike is over. In my judgment, it is the height of cruelty to prevent them from sending these children to such places, if they so desire. But whether or not the children were in the condition of privation, as well as the parents, there should be no power on the part of any State to prevent the parents from sending their children into other States, so long as they are not deserting these children.

The entire text of the Lawrence Survey

The following is an excerpt from the Report on the Lawrence Survey, a comprehensive examination of living conditions in Lawrence in 1911. The entire report can be viewed at no charge at the link directly above.

The City of Lawrence is essentially an industrial community. It was intentionally created to be such a community. First came the recognition by a land surveyor of the water power existing here in the Merrimack River. Next was enlisted the interest of Boston merchants and manufacturers. In 1845 was begun the erection of a dam across the river. There was no village on the site of the present city. The power was developed and factories were built, and people came here to do the work of construction and operation. It is not exactly true to say that the manufacturers brought people here, either in the forties and fifties or in recent years. Opportunities were offered and people came. First came people of New England birth, and English and Scotch workers skilled in textiles; then came Irish, later French Canadians and Germans, and recently people from the Mediterranean shores and Eastern Europe.

It is to be noted that the impulse for growth has never come from within the city’s own life; but always from abroad. Men living elsewhere have built mills in Lawrence, and a population has gathered and swelled in numbers to perform the labor of carrying on the industries. Accordingly, the traditions and resources of a self-contained, or self-sufficient society have never been available in the development of the city. Whatever community good has been achieved has been such as a society of working people could gain for themselves, under the favorable laws and customs of this Commonwealth. Whatever may be lacking is to some extent explained and excused by the same considerations.

Lawrence is like a great workshop, so to speak. It is not the trading centre of a surrounding territory; nor the social centre of outlying villages; nor the home of families who have won wealth or culture in past generations. Many a city of half its size does have all these characteristics; and it is obvious that they are important elements in the common welfare of such cities. Lawrence has always had the difficult problem of the conduct of manufactures in a manner to secure prosperity on the one hand and the welfare of the working people on the other. The writer likes to think that his city is working out a typical modern problem for other communities as well as for itself; that our troubles and our shortcomings are not due to peculiar faults of our own, but belong to nearly every American industrial city; and that if one has faith in the future of our country as a whole, he is entitled to cherish the same faith in the worthy future of this city.

The following studies are intended as a partial self-examination, undertaken in the hope that better understanding may lead to better achievement. The idea had been in the minds of the trustees of the White Fund for some time when they found themselves able to secure the assistance of Mr. Francis H. McLean, then Field Secretary of the Charity Organization Department of the Russell Sage Foundation, now General Secretary of the National Association of Societies for Organizing Charity. Mr. McLean came to Lawrence in December, 1910, and laid down the plan of the Survey. Mr. Robert E. Todd was secured to conduct the examination of housing conditions. Mr. Todd brought to this work the results of much experience in similar investigations elsewhere, and an extremely wide and accurate knowledge of this particular subject. The health investigation was conducted by Mr. Frank B. Sanborn, Professor of Civil Engineering in Tufts College. Prof. Sanborn had given special attention to hydraulic and sanitary engineering, and had experience in similar investigations. Mr. Todd and Prof. Sanborn upon beginning their respective tasks were given full and independent control of the investigations which they conducted. The entire expense of the Survey has been paid by appropriations from the White Fund.