This is the third of my stories about the three boys in this photo. Links to the other two stories are at the bottom of this page.

Lewis Hine carried a pocket notebook so he could jot down the names of his subjects, and other information he was able to get from them. Those notes were passed on to the National Child Labor Committee and became the basis for the captions. Sometimes those notes were not easily readable and mistakes were made in the transcriptions. Like most English-speaking Americans at the time, Hine had trouble with foreign names, especially those of French Canadians. He spelled the boy’s name Cammery, but when I searched for Napoleon on Ancestry.com, I used the Soundex method, which lists all names that look or sound like Cammery.

In less than an hour, I found a Napoleon Camire in the census, and then stumbled upon a newspaper obituary for a Napoleon Camire who died in Maine. A photo of him was published with the obituary, and although he looked like he was in the 60s, he was a dead ringer for the boy Hine photographed in Manchester. It was him. It didn’t take me long to contact one of his children.

Napoleon Joseph Camire was born in Weedon, Quebec, Canada on August 19, 1894, the oldest of at least nine children of Napoleon Camire and Rose (Rousseau) Camire, who married about 1893. In the 1900 census, he was living with his mother and two brothers, who were boarding with his paternal grandmother in Manchester. His father may have been working in Canada at the time. In 1910, a year after he was photographed, he was living with both parents, in Manchester. His father was a weaver, and Napoleon was a cleaner at the cotton mill.

He joined the Army in 1919, and served until 1921. Because of an injury while on active duty, he was awarded a monthly payment of $11.50. Also in 1919, he married Yvonne (maiden name unknown). They had one child, but she died in 1922. Later that year, he married Virginie Rondeau. In the 1930 census, he was listed as a weaver, living in Pembroke, New Hampshire, with his wife and five children. They were to have 11 altogether. The last two were twins. One of them died a month after birth. In the early 1930s, they moved to the Lewiston, Maine area, where Napoleon worked in various textile mills until he retired. His last residence was in Auburn, across the Androscoggin River from Lewiston. He passed away on June 25, 1967, at the age of 72. According to his obituary, he was survived by his wife, three daughters, six sons, 31 grandchildren, and two great-grandchildren. Virginie died in 1991.

I interviewed one of the daughters, Theresa Greenleaf, of Auburn, Maine. She had never seen the Hine photograph.

JM: Were you surprised by the photograph?

TG: Yes, I sure was. It’s a very good picture of him. He sure looks like my father.

JM: Were you surprised he was working at the Amoskeag Mill at that age?

TG: Yes. I thought he was still in Canada then. He never said anything about working as a boy.

TG: I was born in Goffstown, New Hampshire in 1926. We were living in Manchester then. My father was working in the mills.

JM: How many children did your parents have?

TG: They had 10. The last two were twins. One of them died. I was the third child.

JM: What was your father doing for a living at the time you were born?

TG: I remember him as always being a weaver. He worked at the Bates Mill, the Liberty Mill and the Androscoggin Mill in Lewiston. He was a carpenter, too, for a contractor. He built houses. He did that while he was still working in the mills.

JM: When did your parents get married?

TG: They got married on November 12, 1922, at St. Mary’s Church in Quincy, Massachusetts. He was working there, and that’s where he met my mother. Her name was Virginie Rondeau.

JM: Did she work when you were growing up?

JM: When did your parents move to Maine?

JM: Did he own his home?

TG: Yes, starting about three years after we moved to Maine.

TG: He was a quiet man. He liked to have a few beers with the boys. But he was a good father.

JM: Did he have time to spend with his family, or was he working all the time?

JM: What did he like to do when he wasn’t working?

TG: He had a workshop. He liked to make things with wood, like bookcases and chairs and a couch. He could make anything with wood.

JM: When you spent time with him, what did you like to do with him?

TG: We didn’t do too much, because we always had to stay around the house and help with things.

JM: Have you lived all your life in Maine?

TG: Yes, except for living in New Hampshire till I was about seven years old.

JM: Where was your father living when he passed away?

JM: Your father’s picture is one of over 5,000 photos taken by Lewis Hine, and they were part of the effort to get child labor laws passed. So your father was used as an example of child labor. And now, his photograph is in the Library of Congress. What do you think about that?

TG: To me, if a kid is busy, and they’re not going to school, they might just as well work, instead of running in the street.

JM: Do you know how far he got in school?

TG: He probably quit about the time the picture was taken, I guess. Maybe even earlier.

JM: Could he read and write?

TG: No. I just thought he grew up in Canada. I do know that he served in World War I.

JM: What did he die from?

TG: He had a heart attack. He had three of them altogether. He was sick about three years. He was 72.

In June of 2011, I was invited to make a presentation at Museum L-A, in Lewiston, Maine. The local history museum is located in the Bates Mill complex, where Hine took 10 photographs in 1909. It occurred to me right away that Napoleon Camire lived most of his life in Lewiston and nearby Auburn, and that many of his descendants still live in the area. In fact, the family has a big family reunion every year, with attendance as high as 200 people. So I decided to include Napoleon’s story in my presentation. I contacted Irene Blackwood, Napoleon’s granddaughter, and invited her and other family members to come.

The presentation took place on August 19, and about a dozen members of the Camire family showed up. Irene and another family member recently produced a large book about the family history, and they brought copies of it. Included in it is my story about Napoleon. One of Napoleon’s sons, Armand, was wearing a shirt with the “Camire logo” on it. It was an exciting day, and a thrill to meet these delightful people. And to top it all off, I was informed that it happened to be Napoleon’s birthday. So at the end of the presentation, everyone sang “Happy Birthday.” 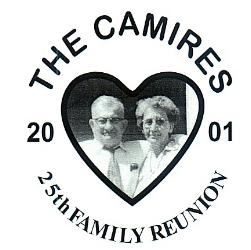