“My feet they are sore, and my limbs they are weary;
Long is the way, and the mountains are wild;
Soon will the twilight close moonless and dreary
Over the path of the poor orphan child.” 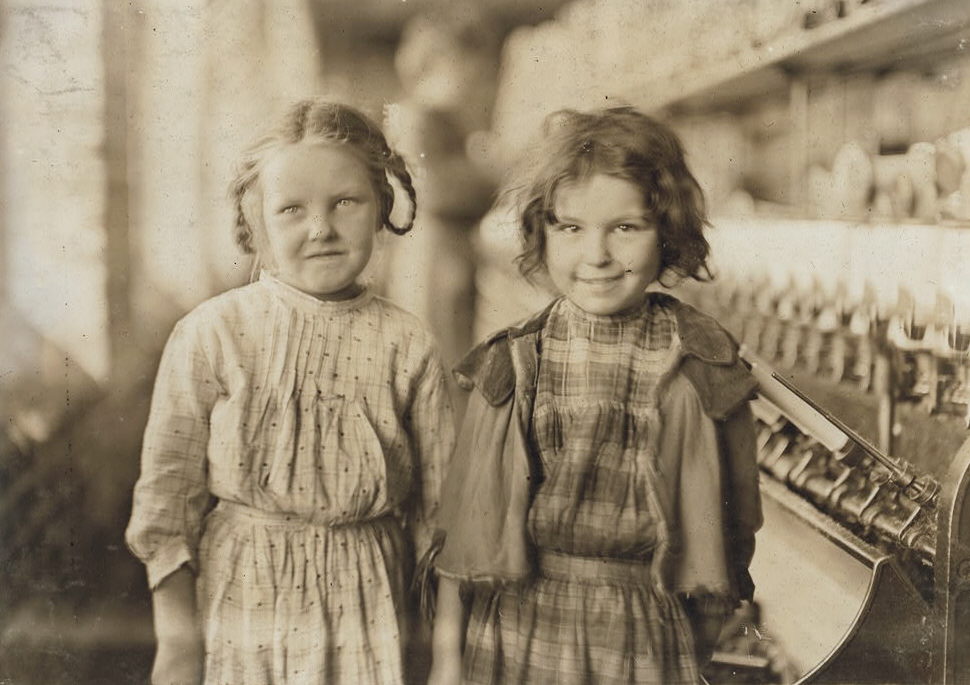 As I type the opening words of this story, it has been five years to the month since I saw this picture for the first time, in August of 2006. It was posted on a photo blog I ran across while searching for information about Lewis Hine. I was stopped dead in my tracks. I thought it was one of the most precious pictures I had ever seen. I was especially captivated by the smiling, dark-haired girl on the right. But I had to remind myself that there were spinning machines sitting ominously in the background, and that these two girls looked no more than seven or eight years old. I was terribly disappointed that Hine did not identify them in the caption. I told myself that I was going to find out who they were no matter how long it might take. But I didn’t know where to start, so I saved the photo to my computer in a file I named simply “Tifton Girls.” And then I returned to my research on other children I had already identified in other Hine photos.

A few months later, I ran across the photo again on the Web and wondered why I hadn’t looked to see if Hine had taken other photos at the Tifton Cotton Mill. When I logged onto the Library of Congress collection, I found that he had taken a total of five, apparently all of them on January 22, 1909. The dark-haired girl was in each one, including this amazing and heartbreaking picture. 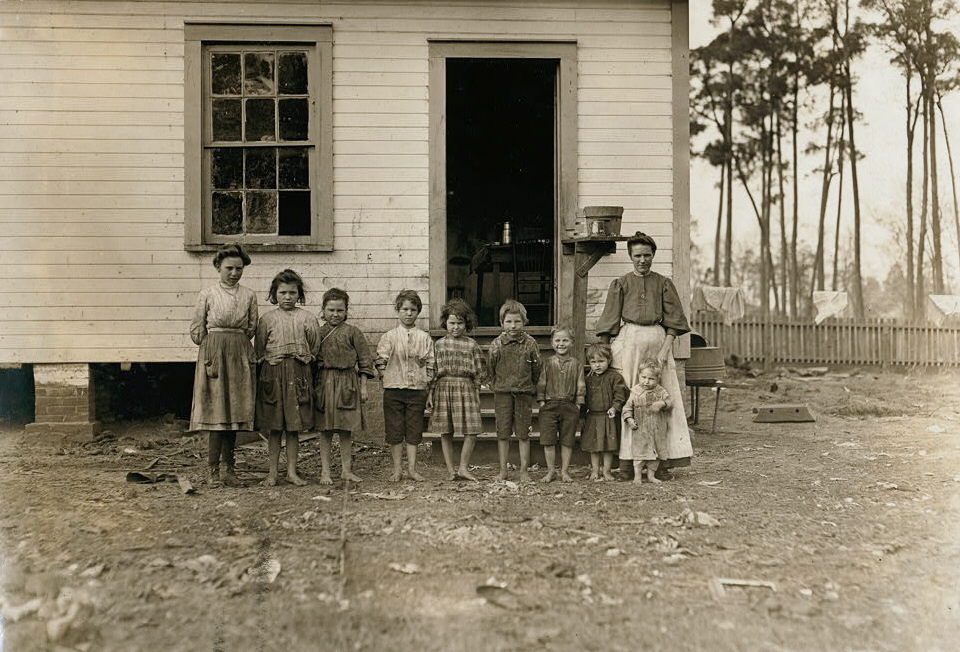 Lewis Hine caption: A family working in the Tifton (Ga.) Cotton Mill. Mrs. A.J. Young works in mill and at home. Nell (oldest girl) alternates in mill with mother. Mammy (next girl) runs 2 sides. Mary (next) runs 1 1/2 sides. Elic (oldest boy) works regularly. Eddie (next girl) helps in mill, sticks on bobbins. Four smallest children not working yet. The mother said she earns $4.50 a week and all the children earn $4.50 a week. Husband died and left her with 11 children. 2 of them went off and got married. The family left the farm 2 years ago to work in the mill. January 22, 1909. Location: Tifton, Georgia.

The dark-haired girl, looking a bit weary, stands in the middle of the family picture, wearing the same print dress. But the other unidentified girl is not in the photo, leading me to assume that she was not related to this family. After all, she didn’t look at all like any of the children. So I decided to stop searching for her, and instead focus entirely on this fatherless family, which surely must have been in a desperate situation. But there wasn’t much information in the caption to work with. Was the dark-haired girl really named Eddie? How does one search for the mother, Mrs. A.J. Young? What was her full name? Was A.J. her name, or her late husband’s name? What about Nell, Mammy and Elic? Were those names accurate? Only Mary seemed a certainty.

Starting with the 1910 census, I searched for everyone named Young, first in Tifton, then in Tift County (Tifton is the county seat), and finally in the entire state of Georgia. I even limited the search to all of the widows in Georgia for that year, regardless of the last name, just in case Hine had gotten the name wrong. But I found no one with even close to the right amount of children, nor any with a Nell, an Eddie, or an Elic (or similar names such as Nellie, Helen, Edith, Edie, Addie, Alex and Alec). I also tried the 1900 census, but nothing of interest showed up.

But in the 1920 census, I found a woman in Tifton named A.J. (or A.G.) Young, a 53-year-old widow. I was almost certain she was the right person, but then I discovered that she had no children of her own living with her. The head of the household was an older man, William Oliver. Also living there was Ben Lanier, his wife Tiffie, and five Lanier children. Tiffie appeared to be the daughter of William Oliver. Mrs. Young was listed as unemployed, leading me to guess that she was boarding there and working as a housekeeper.

The new information led me nowhere. I couldn’t find Mrs. Young in the 1930 census, or in any other records, although without a first name, I was at a tremendous disadvantage. And she might have married again and acquired a new last name. So I tried to track down the descendants of the Laniers, thinking that maybe someone in the family would remember who Mrs. Young was. That ended in failure, after many attempts over a period of several years. All I could find out was that Ben Lanier died sometime before 1930, and Tiffie (maiden name was Oliver) remarried and died in Tifton in 1942. I obtained her obituary, but I couldn’t track down any of her survivors. So I put away the search again.

A few months later, I came up with some new ideas. I created a Mystery Photo page on my website and posted the two pictures, hoping that a descendant might serendipitously run across it. I also contacted the Tifton Gazette. They agreed to run the photos in the newspaper, but no one contacted me afterward. I had run out of ideas. From time to time, I searched Ancestry.com and other genealogy sites, knowing that new data is always being added. But nothing turned up.

On January 24, 2011, 102 years and two days since the date of the photos, I received the following email from a woman named Mildred Rivers:

“I believe the family in the picture of Mrs. A.J. Young of Tifton, Ga., is my grandmother and great-grandmother’s family. My father was Jesse Elbert Willis, son of Mell (not Nell) Young and Samuel Willis. He died in 1961, at the age of 37. He never talked much about his mother’s past. Several of the children were put up for adoption, most in fact. Mell’s mother, Mrs. A.J. Young, was Catherine Young. Her maiden name was Bailey. She married Andrew J. Young. Some of the children’s names are spelled wrong. The girl with dark hair on the right side of the picture of the two mill girls was Eddie Lou Young. My mother, Alice Hill, knows more information about the family. I can give you her phone number. My father’s brother, one of Mell’s sons, is still living. His name is Clinton Willis and I can give you his phone number, too.”

Several hours later, I talked to Mildred, and she told me that she had been searching on the Internet for her family history. She had tried the search term, “A.J. Young,” and my Mystery Photo page came up. She urged me to call her mother, so I did right away. This is part of what Alice Hill told me:

“In those days, this part of the country was not even well settled. People were illiterate, and they worked wherever they could find a job. I am sure Mrs. Young had to work in the mills because she had all those children, and her husband had died. The cotton mills were about the only place where women could work.”

“Catherine is buried in Riverside Cemetery, in Albany (Georgia). Her daughter Mell is buried at the same place, and so is Mell’s husband. Mrs. Young lived in Ashburn when I married her grandson, Jesse Willis, in 1945. At that time, Eddie Lou lived in Plains, Georgia. I only saw her one time. She has children around Plains now, but I don’t know what their names are. Eddie Lou and her sister Mary were placed in an orphanage. In fact, most of the younger children were. My husband died at the age of 37. Alex (not Elic) looked him up when he was in the hospital, but I don’t know what became of him. Mattie (not Mammy) left Albany about the time I married my husband and moved to California. When Mrs. Young got old, she couldn’t live alone, so they moved her to Albany, and she lived in Katy Lou’s house. Katy Lou was Mell’s oldest daughter.”

Several days later, I received another email from Mildred Rivers:

“I talked with my mother on the phone today. She said to tell you that she was so happy you have decided to find Catherine’s family. She said she thinks Catherine would have been pleased with what you are doing, and that it almost brings them back to life again.”

But finding Catherine’s family was still a huge challenge. I still didn’t have a lot to work with. If the children had been adopted, how would I know what their last names were?

After seven more months of research, combing the Internet day after day, piecing together dozens and dozens of scraps of information, making hundreds of phone calls, and conducting numerous interviews, I have identified every child in the picture, and even the two children who “went off and got married,” as the caption said. Ultimately, I was shocked to learn that the Mrs. A.J. Young who was living with the Lanier family in Tifton in 1920 was not Catherine after all. I thought about how many miles I had traveled down that road.

Below you will see all five of the Hine photos of the family, learn the names of each of the children, and read the dramatic story of the family’s struggle to survive a catastrophe and carry on with their lives. Included in the story are interviews with descendants, and many photographs of Catherine and her children at various stages in their lives. I will begin with Mr. and Mrs. Young, and follow with each child, oldest to youngest. But in order to fully understand what this family was going through, we need to know more about Tifton Cotton Mills and child labor conditions in Georgia at the time. Information about the Tifton Cotton Mills will immediately follow the five photos below.

Lewis Hine caption: A family working in the Tifton (Ga.) Cotton Mill. Mrs. A.J. Young works in mill and at home. Nell (oldest girl) alternates in mill with mother. Mammy (next girl) runs 2 sides. Mary (next) runs 1 1/2 sides. Elic (oldest boy) works regularly. Eddie (next girl) helps in mill, sticks on bobbins. Four smallest children not working yet. The mother said she earns $4.50 a week and all the children earn $4.50 a week. Husband died and left her with 11 children. 2 of them went off and got married. The family left the farm 2 years ago to work in the mill. January 22, 1909. Location: Tifton, Georgia. 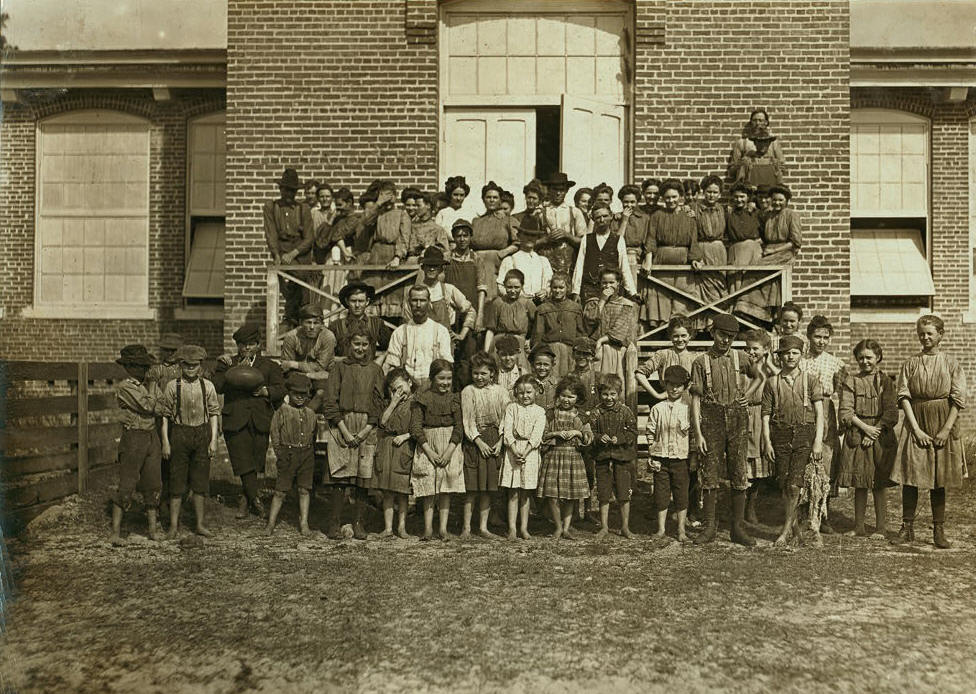 Lewis Hine caption: Workers in the Tifton (Ga.) Cotton Mills. All these children were working or helping. 125 workers in all. Some of the smallest boys and girls have been there one year or more. Location: Tifton, Georgia, January 1909.

“At Tifton, Georgia, there is a cotton mill employing 125 hands. I obtained several photos of the entire force at noon. This is the largest proportion of youngsters I have ever seen in a cotton mill. Everyone in the photo (except the boy with the football, who is the Supt.’s son) works or helps regularly in the mill.” -Lewis Hine, National Child Labor Committee Investigation Report 315, page 1 (1909)