In one of my early interviews, a descendant told me that Catherine’s oldest child was named Georgia, but the person didn’t know her last name. I found the death certificate online for a Georgia Watson, who died in Georgia and was about the right age. Listed on her death certificate were her parents, Jesse Young and Catherine Bailey.

Georgia Young was born in Irwin County, Georgia, on November 21, 1888. She married George T. Watson in 1908. Mr. Watson was the son of George W. Watson and his first wife (name not known). Georgia and her husband had five children: Andy (or Andrew), born about 1911, Effie, Alton, George T., and Evie. In 1920, she was living with her five children in Pine Hill, Worth County, but not with her husband. She was renting a farm near her father-in-law’s farm. She told the census taker that she was widowed.

Four years later, on February 17, 1924, she died of acute peritonitis, in Turner County, probably in the town of Ashburn. Her mother Catherine was apparently living in Ashburn at the time. She was pregnant when she died. According to the death certificate, she was divorced from Mr. Watson, not widowed. She was buried at Oak Grove Baptist Church Cemetery in Ashburn. Six years later, Andy, Alton and Evie were living with their grandfather George Watson and his second wife, in Worth County. Son George T., then 13 years old, was a lodger with the Chapman family in Worth County. The census listed him as an orphan. And Effie was living with Catherine’s daughter Mell, in nearby Cook County. So it’s likely that Georgia and Mell kept in touch. I was able to locate a descendant of one of Georgia’s children, and he told me that he had heard that Georgia was pregnant with twins when she died. I was unable to locate any photographs of her.

Nine years after I posted this story, I received the following email: 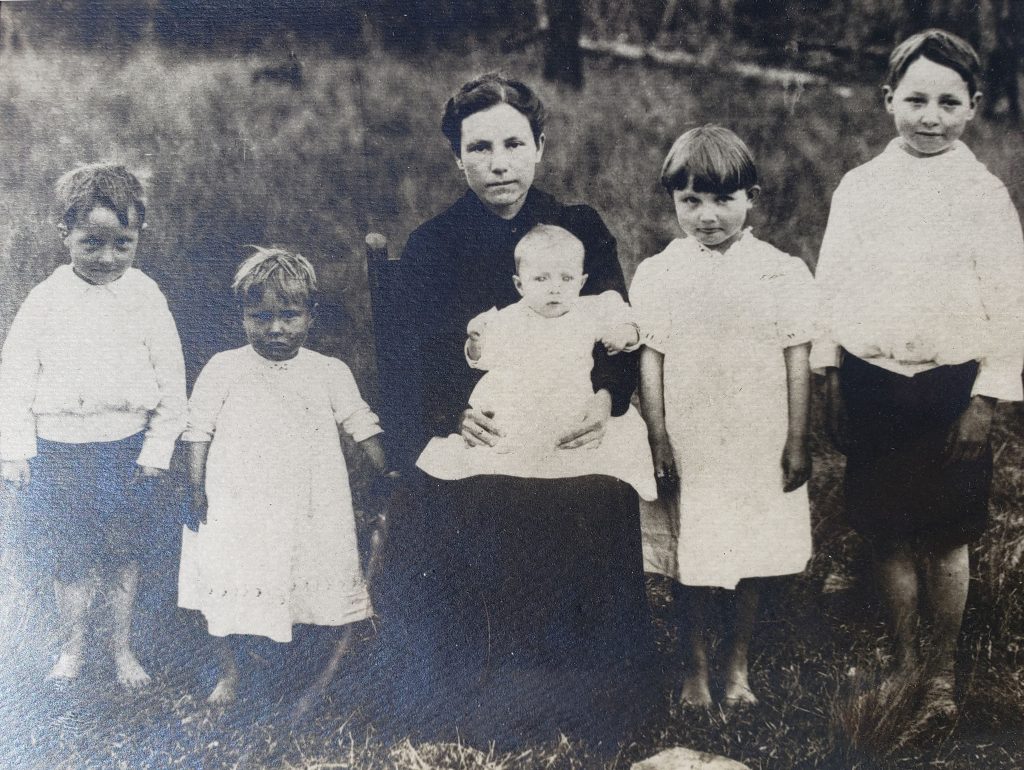 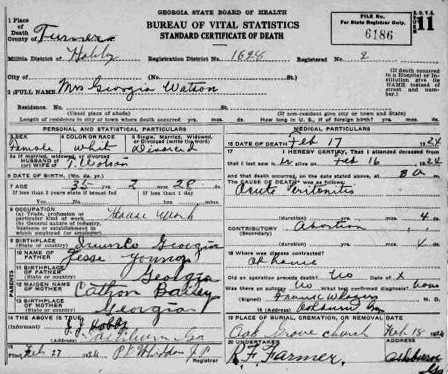 Ella Arelia Young was born on October 26, 1890. She married Thomas Alexander Cogan in 1908, who was 11 years older than she. In 1910, they were living in Mitchell County, in southwest Georgia, where Thomas worked in a mill. In 1915, they moved to Phenix City, Alabama, just over the border from Columbus, Georgia. Both she and her husband worked in a mill. Thomas died in 1924, leaving Ella with four children: Jesse, Mary, Jewel and Margaret. She continued working in a mill. She died in Phenix City on December 29, 1948, at the age of 58. I was unable to locate any photographs of her.

I interviewed one of her granddaughters, Joyce Adams, who lives in Phenix City. She is the daughter of Ella’s daughter Jewel, who died in 2007. I found Joyce after I obtained Jewel’s obituary. She was very surprised to see the photos of the family in Tifton.

Excerpts from my interview with Joyce Adams, granddaughter of Ella Young. Interview conducted on February 23, 2011.

My grandfather, Thomas Cogan, died young and left my grandmother Ella with four children. After that, she went to live with her two oldest daughters. One of them, my Aunt Mary, had a son named Thomas. My grandmother practically raised him. As long as she was able, my grandmother worked in the mill. She was very frail, and she was ill most of her life. I was 15 when she died, at the age of 58. She had a bad gall bladder and needed surgery, but while she was in the hospital, she threw a blood clot, and it killed her.

Mell was one of my grandmother’s sisters. Two of Mell’s sons visited sometime after my grandmother died. I don’t know much about her mother Catherine. The only thing I remember is that Catherine came here and wanted to live with my two aunts for a while. She was living in Albany at that time. They told her they couldn’t take care of her. Once when she got sick, we all went to Albany to visit her. I didn’t go to the hospital, but my mother and her two sisters did. We just stayed overnight. I don’t remember my grandmother ever seeing Catherine, but she always knew where she was.